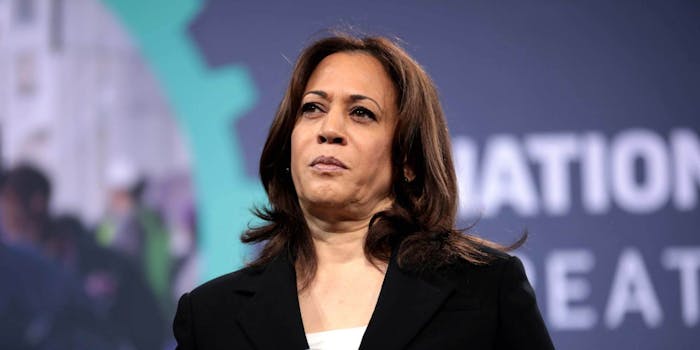 Critics argued that even Mitt Romney offered Americans more. But is there more to the story?

Twitter users are up in arms after legislation suggested by Sen. Kamala Harris (D-Calif.) was deemed not progressive enough in helping families struggling financially due to the coronavirus pandemic.

Harris on Tuesday suggested providing up to $500 a month for working families as part of her LIFT act.

“We cannot ignore the strain that emergency situations like the coronavirus pandemic put on many families who are already living paycheck to paycheck,” Harris said. “I introduced the LIFT Act to give working families up to $500 a month. We need it now more than ever.”

Harris instantly received pushback from progressives who pointed out that Sen. Mitt Romney (R-Utah) had recently called for giving $1,000 to every American.

“How did we go from Republican Mitt Romney suggesting $1,000 to the supposedly ‘progressive’ Democrat Kamala Harris suggesting $500?” @rtyson82 said.

But is there more to the story? For starters, Harris did not write the LIFT Act in response to the outbreak. The legislation was originally crafted back in 2018.

And while Romney suggested a $1,000 check for every American, such checks would be a one-time deal while Harris’ plan would be monthly.

“My bill provides up to $500 not once, but every. single. month,” Harris added. “During this crisis, we must do much more. I’m working to shape a robust new bill to help families.”

Supporters of the former Democratic candidate also highlighted the differences, arguing that the criticism of Harris had been unwarranted.

“Kamala Harris just unveiled her plan to give poor ppl $2 trillion,” user @cultofdusty1 said. “Mitt Romney unveiled a plan to give people 365 billion & now I see half the popular lefty accounts shitting on her for being to ‘the right of Romney.’ These bad takes from all these big accounts are getting weird.”

Even with the discrepancies laid out, critics of Harris still pushed back by noting that a household where every adult received $1,000 would be significantly better off up front than an entire household that could only receive at most $500.

But while Twitter users argue over which plan is more progressive, other politicians have introduced similar measures as well.

During a White House press conference on the outbreak Tuesday, Treasury Secretary Steven Mnuchin stated that discussions were underway with congressional leaders for a plan to send checks to Americans. President Donald Trump personally suggested that some people should get $1,000.

Rep. Ilhan Omar (D-Minn.) announced on Tuesday as well plans to introduce legislation that would not only give every American adult $1,000 but $500 for children as well.

No exceptions,” Omar tweeted. “We need to support the American people NOW—and this is just a start.”

Numerous senators, including Michael Bennet (D-Colo.), Cory Booker (D-N.J.), and Sherrod Brown (D-Ohio), however, have proposed the most substantial plan yet.

Despite the bidding war, it still remains to be seen how much, or if, Americans will receive a check from Uncle Sam.