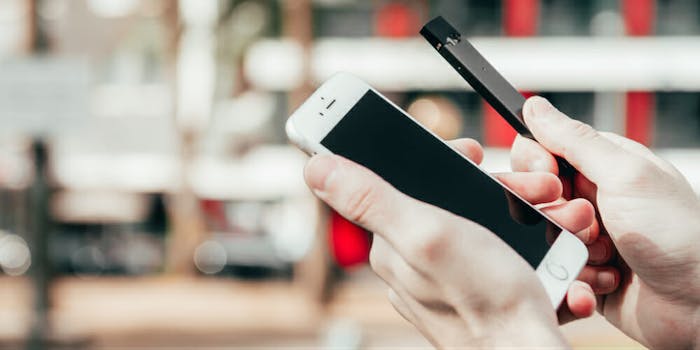 Juul has contested the study's findings.

A new study published in JAMA Pediatrics determined that nearly half of Juul’s Twitter followers are not old enough to legally purchase e-cigarettes.

In April 2018, researchers analyzed data from all of Juul’s Twitter followers who had public accounts and had tweeted at least once. They used an age-prediction algorithm to determine the age of the users and ascertain how many were underage, regardless of the accounts’ reported age. They found that about 45 percent of people following Juul at that time were 13 to 17 years old, meaning nearly half of the e-cigarette company’s followers cannot legally purchase its products in the United States.

In response to rising teen smoking rates, 14 states have raised the minimum age for tobacco purchase to 21 years. About 36 percent of Juul’s Twitter followers were 18 to 20 years old, and only the remaining 19 percent were 21 and older.

However, Juul has contested these findings in a statement to Reuters, saying the numbers reported in JAMA Pediatrics “differ significantly” from the user data given to them by Twitter. Juul said that per the data it has from Twitter, only 3.9 percent of the followers were 13 to 17 years old in May 2018. In the statement, Juul said that during the timeframe of the study it had “proactively, manually blocked underage users from following our Twitter feed.”

Juul has repeatedly asserted that the intended use of its product is for adults to replace cigarettes, but according to the U.S. Centers for Disease Control and Prevention, the number of middle and high school students who used e-cigarettes rose from 2.1 million in 2017 to 3.8 million in 2018. After the FDA announced it would be cracking down on flavored e-cigarettes unless companies selling them could prove they weren’t targeting minors, Juul tried to regulate itself. It shut down its Facebook and Instagram accounts and made the Twitter non-promotional, as well as removing flavors popular with teens from physical stores. Whether or not that is enough to stop rising smoking rates among teens remains to be seen.