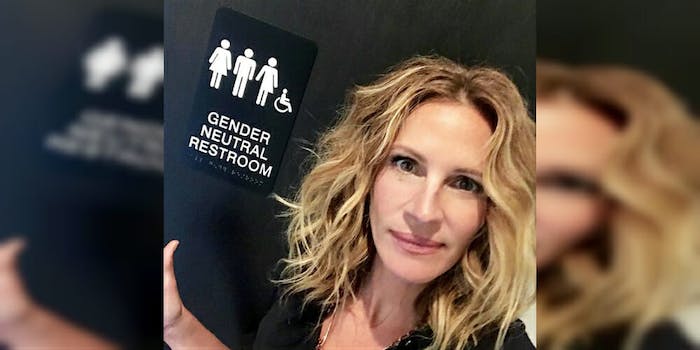 ‘I wish they all said this.’

Julia Roberts posted a graceful selfie outside a gender-neutral restroom on Wednesday, while offering support to the LGBTQ community.

The Academy Award-winning actress, 51, used the Instagram selfie to advocate for gender-neutral spaces and LGBTQ rights. “I wish they all said this,” she wrote in the Instagram post and told her followers to check out her Instagram story for more info.

Roberts posted a video to her Instagram story, giving a shout out to the LGBTQ education advocacy organization GLSEN. “Hi everybody, I want to talk to you about an organization that I feel really strongly about, it’s called GLSEN,” said Roberts in the video, according to Pink News. “GLSEN makes schools safe for every student no matter your sexual orientation or gender identity.”

Roberts has been a long-time supporter of LGBTQ rights and a public and material ally to GLSEN. She was awarded the GLSEN Respect Award in 2014 for her contributions to helping LGBTQ youth. For her 49th birthday, she asked people who wanted to give her a gift to instead donate 49 dollars to GLSEN. That donation page is still up, in case you want to celebrate her 49th birthday two years later.

She has also admonished President Donald Trump for his flip-flop on LGBTQ rights. “As a parent, I want all students to feel safe and protected at school,” said Roberts in 2017. “Before Trump got elected, he always said he was totally for LGBTQ students because they’re people too and they deserve an education. And then after he got elected, he was basically like, ‘Just kidding, I lied.’” More recently she helped raise awareness for the Day of Silence, an annual protest against pervasive anti-LGBTQ bullying in schools.

In her Instagram story yesterday she renewed her call to action, saying, “I’ve donated, and I’m asking you to. Click that donation button, every dollar helps.”