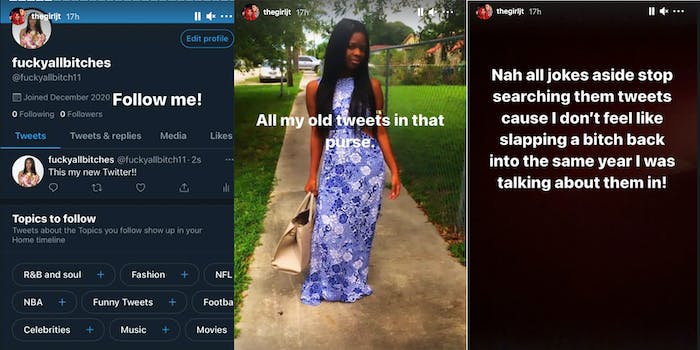 JT (Jatavia Shakara Johnson), one half of Miami hip-hip duo City Girls, appears to have deleted her verified Twitter account on Monday following a series of alarming tweets from several years back resurfacing.

Screenshots of tweets from 28-year-old, who celebrated her birthday over the weekend in Miami (and summarily Instagrammed it), are now resurfacing on the platform. Though one pithy commenter noted, “JT got an offensive tweet for everyone; she could’ve been a writer on Glee,” it’s a couple of choice tweets about R. Kelly that has created the most flap.

Though allhiphop.com was not able to confirm or deny the veracity of the tweets from the now-deleted @thegirljt Twitter account, plenty of people on Twitter are taking the screenshots as real.

Two tweets some of the summer of 2017 make specific R. Kelly references, with a July 19, 2017 screenshot appearing to be from the account noting, “I wish rkelly was here with me rn I know he would get me right.” Another, from August 10 of that year, bluntly states, “I wanna get raped by @rkelly.”

There’s also a perplexing tweet dating back to 2011 where she allegedly tweeted “I swear I hate N****s I should be a fucking nazi,” as well as a transphobic dig at Caitlyn Jenner from 2015, saying, “Caitlyn Jenner disgust me old dumb ass man.”

JT’s Instagram is still active, and she appeared to at least somewhat address the controversy in a series of Instagram posts on Monday. That included a picture with the caption, “All my old tweets in that purse.” Another post seemed to address the issue, noting, “Nah all jokes aside stop searching them tweets because I don’t feel like slapping a bitch back into the same year I was talking about them in!”

The IG story also included a screenshot of a just-opened Twitter account, @fuckyallbitch11, where several of the other controversial old tweets were addressed.

That includes a tweet on the one-year anniversary of the 9/11 terrorist attacks that employed emojis rather unfortunately.

She did allege, though, that at least one very questionable tweet was “Photoshopped” and went too far.

While some of the alleged tweets crossed the line for a number of observers, some seemed to appreciate her caustic humor and even insight. One person responded to her “FUCK WORKING FOR THESE CRACKERS!” post to declare her “the Karl Marx of our generation.”