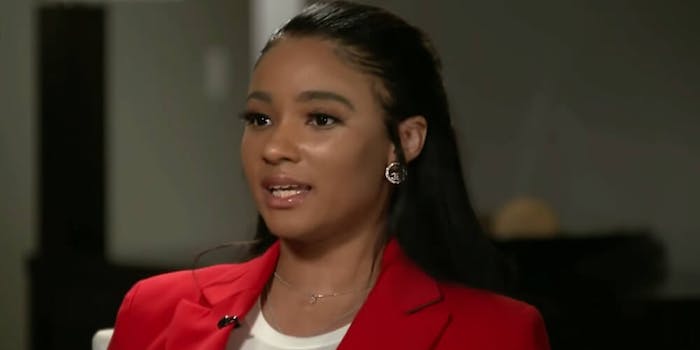 She's going to use Patreon to share her story.

R. Kelly‘s girlfriend Joycelyn Savage allegedly plans to dish all the dirt on the singer, including information she claims is protected by a non-disclosure agreement (NDA)–and she plans to use Patreon to do so.

“There’s something I need to reveal, something I’ve should’ve [sic] talked about a long time ago,” she wrote on Instagram.

In a follow-up post, the person alleging to be Savage revealed that she is going on a tell-all spree about her relationship with the disgraced R&B star and will be posting “daily chapters” of her story on Patreon.

“Things I am going to reveal that was sweared not to see the day of light—by NDA,” the promo video reads, set to Lizzo’s hit song “Truth Hurts.” “I am risking my life for many others. ‪This story is 18+ and only for mature audience, I want to make sure my story is very detailed as I can remember.”

The 24-year-old, whose family publicly pleaded with her to return home after she moved in with Kelly, 52, previously stood by the singer and even appeared at his court hearings and in an interview where she proclaimed his innocence, alongside one of his other girlfriends, Azriel Clary, 21. But now it appears that she is singing a completely different tune, claiming the singer is an abuser who forced her to call him “daddy” and used her dreams of being a singer to control her.

In a paywall-protected blogpost, Savage began her tell-all by revealing she met R. Kelly at a concert when she was just 17. At 19, she dropped out of college to move in with the singer who promised to make her the “next Aaliyah”–R. Kelly illegally married then 15-year-old Aaliyah in 1994–but not too long after he became domineering and controlling.

“After these couple of months Robert started giving me commands, and making sure I call him by certain names. Like ‘Master’ or ‘Daddy’ which I didn’t really care for at the time,” Savage wrote in her post, per the Daily Beast.

“If I wasn’t getting paid or pursuing my dream I would’ve went home, but all of that didn’t stop just yet. But It started getting worse by day by day, he would raise his voice at me if I didn’t call him by those two names,” she added.

Savage alleges Kelly threatened to ruin her life if she ever spoke to her parents or decided to leave him.

“He would always would say ‘All this can stop today, you want a career? Or do you want to live a normal life’; basically trying to make me do what he wants,'” she wrote.