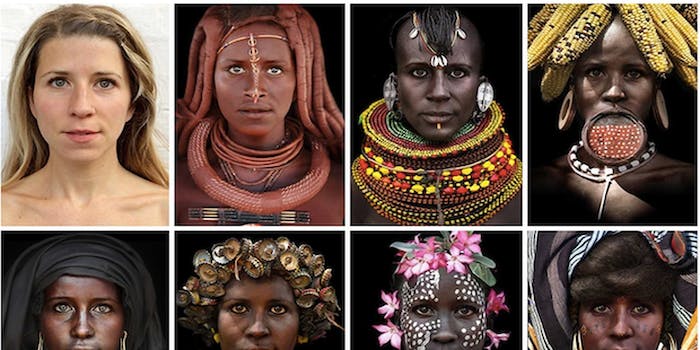 This could not have gone worse.

If you ever find yourself contemplating blackface, here’s some free advice: don’t do it. A Hungarian journalist came to a different conclusion and now a fellow journalist in the U.S. has taken her to task.

Boglarka Balogh donned blackface in seven sets of photos for a project she called “I Morphed Myself Into Tribal Women To Raise Awareness Of Their Secluded Cultures.” In her original post on Bored Panda, she wrote that the purpose of the project was to “show how beauty varies across the globe and prove that all of us are beautiful in a different way.”

While the Hungarian woman’s Facebook friends were supportive of her project, calling it “interesting, original,” and “very good,” Internet users across the globe had a different take. One commenter on Bored Panda wrote:

As a Turkana woman and considering that most of the African tribes you mention come from people i call friends and family, I AM ABSOLUTELY APPALED AT YOUR NERVE! How dare you!!! Have your never read of white privillege? blackface? Cultural appropriation? While we are out here being killed over our dark skins, being deemed inferior because of our cultures, you think being an African woman is a costume you get to put on and take off!

Amazing how some white people can always manage to make themselves the center of EVERY DAMN THING!! I am hardly surprised any more how lacking in self awareness some people can be. Yes it is now considered hot and trendy to claim to be an ally but we see right through people like you. Check your ego at the door then you can come in.

Balogh heard them loud and clear, and eventually took down the post on Bored Panda—but not without trying to explain herself:

Update: Since I had no intentions to offend anyone and yet I’m not able to answer to all of you, I’ve decided to delete my post.

My intention was 100% pure with this tribal art, being a human right lawyer and journalist who knows pretty much about racism and similar issues, I have never imagined that my work will annoy so many people and that I will have to explain myself. And sure, I will not do that. Keep calm and love every human.

At least one freelance journalist had a more innovative reaction to Balogh. Orion Donovan-Smith created a photo set of his own, entitled, “I morphed myself into American tradespeople to raise awareness of their traditional lifestyles.”  As he wrote the Daily Dot in an email, “I couldn’t help but laugh at the idea that swapping your face for other people’s faces would be the way to raise awareness of their existence.” 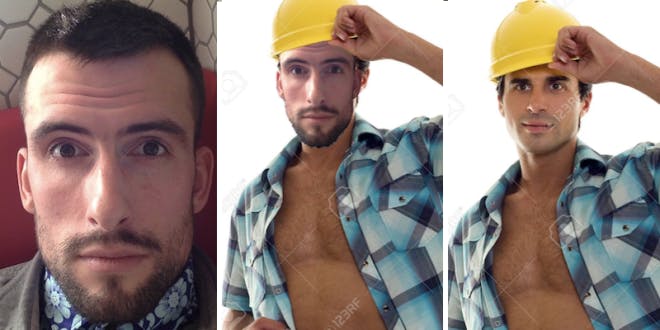 The caption for the photo above, which shows Donovan-Smith reimagined as an exotic dancer, reads:

“The United States’ deeply prudish culture, stemming from the country’s Puritan roots, has long created a market for performers to provide an outlet for Americans’ private fantasies. Pictured here is a male dancer in the role of a physically active laborer, a common and increasingly mythological object of desire as more and more Americans flock to sedentary jobs and only a select few can afford treadmill desks.”

He also took to Preview, the rudimentary Apple editing program, to picture himself as a farmer, logger, butcher, watch and clock repairer, mechanic, and electrician. 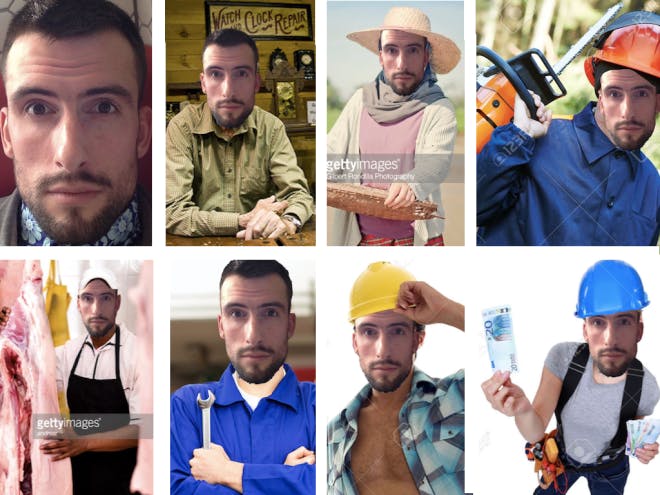 When Donovan-Smith first read about Balogh’s project, he posted it on his Facebook and asked if people thought, despite everything, there was any value in her project. “I’m pretty sure her post wouldn’t have gotten nearly as many reads had it been called ‘Here Are the Actual Faces of 7 Women Whose Lives You Should Care About,'” he explained. “But on balance, I don’t think hers was the best approach.”

He continued, “I want to say that I’m not eager to participate in the kind of public shaming that tends to happen in these situations, and which usually only serves to further entrench people on two sides of a culture war—two sides that don’t seem interested in speaking the same language. But this felt like a special circumstance. “I’m not sure what was going through her mind when she posted those images, but it was probably something like, ‘this is a thing I can do and it would be cool,'” he surmised.

While it’s easy to write off this incident as foreign ignorance, the U.S. is far from immune from the offensive practice of blackface. A white student at a Florida high school recently dressed up as music artist Nicki Minaj for homecoming and Vine star Matthew Espinosa came under fire at last year’s VidCon for donning blackface as part of a costume. And perhaps the most high-profile perpetrator of blackface is Rachel Dolezal, the former NAACP chapter leader who was born white but now identifies as black.

So if you decide that you must do blackface, just remember that you will be mercilessly and deservedly mocked. And keep Donovan-Smith’s wise words in mind: “Something you publish online isn’t confined to a local audience.”

H/T and image via the The Frisky