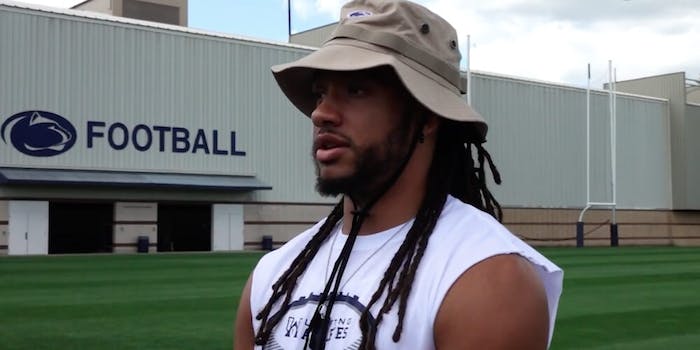 Penn State football coach James Franklin on Tuesday condemned a letter reportedly penned by a university alumni that was sent to one of his Black players, Jonathan Sutherland.

In addition to a bevy of other offensive remarks, the alleged alumni referred to Sutherland’s dreadlocks as “disgusting” and “certainly not attractive.”

Franklin responded to the letter during a weekly press conference: “The football that I know and love brings people together. It embraces differences: Black, white, brown; Catholic, Jewish or Muslim; rich or poor, rural or urban, Republican or Democrat. Long hair, short hair, no hair. They’re all in that locker room together.”

“Jonathan Sutherland is one of the most respected players in our program. He’s the ultimate example of what our program is all about,” he later added. “He’s a captain. He’s a Dean’s List honors student. He’s confident, he’s articulate, he’s intelligent, he’s thoughtful, he’s caring, and he’s committed. He’s got two of the most supportive parents, and I would be so blessed if my daughters would marry someone with his character and integrity one day.”

“One of my teammates got this. Explain to me how this isn’t racist,” Shelton tweeted.

One of my teammates got this. Explain to me how this isn’t racist. pic.twitter.com/Qms1F6DEEP

Penn State responded to Shelton’s tweet, saying it could not verify the source of the letter, but insisted its content “does not align with our values.”

While we don’t know the source of this letter or the authenticity, obviously its content does not align with our values. We strongly condemn this message or any message of intolerance.

It’s no shock the school is distancing itself from the letter–which ESPN confirmed was written by Johnstown, Pennsylvania, resident Dave Petersen–since its content is pretty damning.

“Though the athletes of today are certainly superior to those in my days; we miss the clean cut young men and women from those days,” Petersen wrote. “Watching the Idaho game on TV we couldn’t help but notice your —well – awful hair. Surely there must be mirrors in the locker room! Don’t you have parents or girlfriend who’ve told you those shoulder length dreadlocks look disgusting and are certainly not attractive.”

“You will certainly be playing ‘on Sunday’ in the future but we have stopped watching the NFL due to the disgusting tattoos, awful hair and immature antics in the end zone,” he added.

Petersen later told the Tribune-Democrat he did not intend for his letter to have a racist message. Rather, he said, his letter “wasn’t threatening or anything. I was just disgruntled about some of the hairdos that we’re seeing. You think of Penn State as a bunch of clean-cut guys.”

Despite his mediocre apology, Sutherland wrote on Twitter he took no “personal offense” to the letter–though he found Petersen’s remarks “degrading.”

Sutherland added that even though he hasn’t received an apology, he’s already forgiven Petersen.

”Let this be one of the many examples to us that in the year 2019, people of different cultures, religions, and ethnicities are still being discriminated against and it needs to stop,” Sutherland wrote. “Don’t be scared to be different!!”