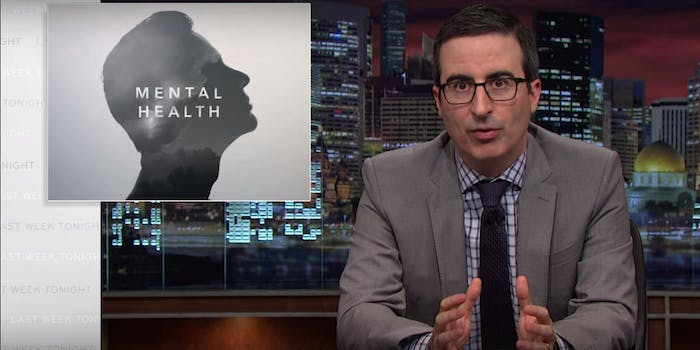 Mental illness is a serious problem in America, but it has little to do with mass shootings.

Many politicians and pundits have developed an interest in mental illness following the mass shooting at Umpqua Community College. But as John Oliver pointed out Sunday on Last Week Tonight, shifting the conversation to mental illness often seems like a distraction tactic to avoid discussing gun control.

The rest of the time, when there isn’t a mass shooting in the news, conservative politicians like Mike Huckabee and Donald Trump remain oddly silent on the topic of mental health, Oliver noted.

Put simply, we still don’t understand how to talk about mental illness as a national health issue. People with mental illnesses are far more likely to be the victims of violence than the perpetrators, but media coverage frequently paints a very different picture.

When it comes to treatments for mental illness, we still have a long way to go. As Oliver explained, some mental institutions actually organize “greyhound therapy” programs, a euphemistic term for getting rid of patients by giving them a one-way Greyhound bus ticket to another state.

We really need to do better than this.