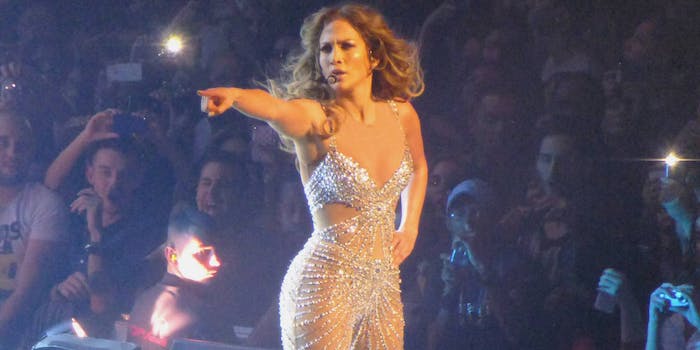 Lopez posted the hashtag in relation to a new single—and has since deleted it.

Jennifer Lopez recently teamed up with Lin Manuel Miranda on a single to benefit Orlando shooting victims, “Love Make the World Go Round.” But while the song is a celebration of love in all its forms, J.Lo hasn’t been receiving a lot of love lately.

In a now-deleted tweet, she posted a photo of herself and Miranda holding hands with the tags #LoveMaketheWorldGoRound—and #AllLivesMatter.

According to the Huffington Post, Lopez also used the #AllLivesMatter tag on an Instagram picture, but it appears the hashtag has been deleted from that post, as well.

The hashtag is often used as a counter-argument to the #BlackLivesMatter movement, which seeks to bring awareness to the large numbers of black men and women in America killed by the police. The backlash to Lopez’s tweet has been swift and severe.

.@JLo While you were #alllivesmatter -ing, Black, brown and native folks are dying. Too far from "the block" to remember? #girlbye

Hover, some have come to her defense:

It’s not evident if Lopez knew about the hashtag’s history. Both she and Miranda, who was also pictured in the tweet, have remained silent on the controversy.