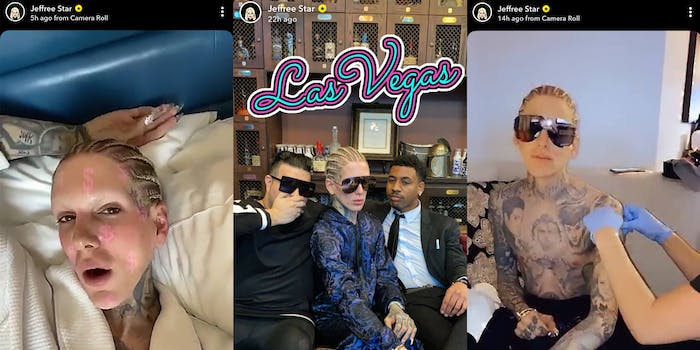 Jeffree Star wears cornrows after being accused of cultural appropriation

Critics say he still hasn't learned from past mistakes.

Days after getting called out for cultural appropriation in his new ad campaign, makeup mogul Jeffree Star posted photos and videos of himself on Snapchat showing cornrows in his hair.

In the Snapchat stories, Star is seen shopping and getting a sodium chloride injection in Las Vegas.

“Lmao you know he’s seen the comments about his photoshoot hairstyle (bc he’s been blocking people) and instead of saying anything about it he posts this,” one Twitter user wrote.

The ads featured Star sitting on a throne and wearing dreadlocks with laid edges. People said the hair styling was blatant cultural appropriation.

“Even if you don’t get it, even if you think it’s silly…If you KNOW that something you do is going to upset people of another culture, just DON’T DO IT,” one user wrote. “You don’t HAVE to understand. You not understanding is irrelevant. You don’t have to understand to be kind and respectful.”

At the start of his career, a video of Star saying the N-word circulated the web. Star later apologized, telling Allure that he was “so sad that I spoke like that. I’m just tired of being accused of something I’m not.”

After the debut of the Blood Lust ad campaign, fans said Star didn’t learn from his past mistakes.

“If [Star] was really a changed person like he claimed, his actions would match his words,” one user wrote. “He KNOWS his reputation & if he cared about not being labeled a racist, he would be careful to avoid situations like this. Use another hairstyle, it’s not that hard.”

A representative for Star did not immediately respond to the Daily Dot’s request for comment.