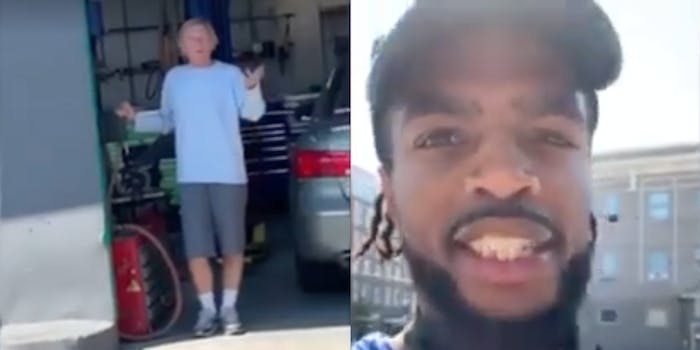 Portland station refused to sell gas to a Black man, saying he could be a BLM arsonist

The customer said the man asked him if he was 'one of those Black Lives Matter protesters.'

The Black Lives Matter protests in Portland, Oregon have been ramping up for weeks.

Jay’s Garage, an attendant at Portland gas station, refused service to a customer seeking gas on Tuesday. His reasoning? The man looked like “one of those Black Lives Matter protesters,” according to a Facebook post about the interaction.

Dom DeWeese was looking to fill a simple red gas container to tote back home. His lawnmower needed filling, and, as he stated in a video posted to his Facebook page, he had mole holes on his property that needed dealing with. When he arrived at the station, however, an older white attendant turned him away. The attendant indicated that DeWeese looked like an “arsonist.”

“You haven’t seen the news?” the man asks DeWeese in the video. “There’s dumpster fires. They get a can of gasoline, and they start the fire.”

DeWeese presses on, attempting to track the attendant’s thought process.

“So are you picking and choosing who to sell gasoline to,” he asks the attendant, who answers in the affirmative. “Okay, why aren’t you selling gasoline to me?”

The attendant has no answer. He claims that DeWeese’s gas container is “illegal,” but it appears to be a standard red container.

The attendant continues to bring up “dumpster fires” when DeWeese questions his motivation for refusing him service.

“I’m just doing my part to keep down the fires in town,” he says.

When DeWeese brings up the optics of his decision, and the damage it could do to his business, the attendant grows sarcastic. “Oh like we can make some money on a gallon of gas,” he says.

“This gentleman won’t sell me gasoline because… I’ll drop it, he’s being racist,” DeWeese finally says. The attendant tries repeatedly throughout the exchange to push DeWeese toward another station “two blocks left.” When DeWeese begins explaining the situation to a passerby, the attendant steps into Ken territory. Online, the names “Ken” and “Karen” have become slang for racist, entitled white people.

“He’s harassing me,” the attendant claims to one of the passerby.

When pressed, the attendant claims he is willing to fill DeWeese’s car or lawnmower with gas, but continues to refuse to fill the container.

The video ends soon after. DeWeese’s upload quickly rose to viral status, racking up more than 500 shares and several hundred likes before getting picked up by attorney Ben Crump. When Crump shared the video, it reached an even broader audience. On his Twitter page, the video has collected nearly 2,000 retweets, and just under 4,000 likes.

In response to the viral video and the flood of negative press, Jay’s Garage responded with its own Facebook post.

“We at Jay’s Garage would like to address the situation that happened at the station yesterday,” the statement begins. “The behavior exhibited by the employee was completely unacceptable and appalling; this goes against our business policies and practices. We immediately terminated his employment based on his poor treatment of another human being as soon as we learned of the incident.”

The Daily Dot has reached out to DeWeese and Jay’s Garage.