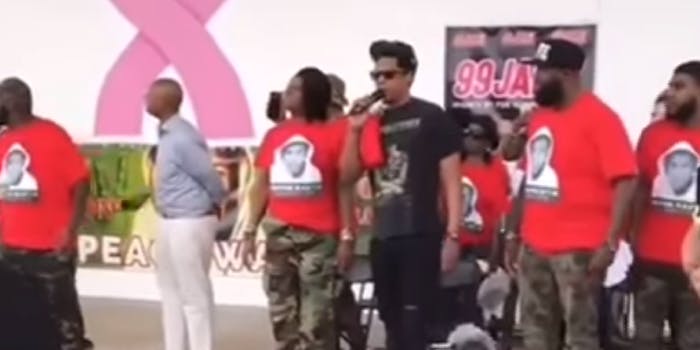 'His name will sit alongside some of the greats.'

Last Monday would have been the 23rd birthday of Trayvon Martin, the Florida teen who was slain by neighborhood watchman George Zimmerman in 2012. Each year, he’s memorialized in an annual remembrance, the Peace Walk & Peace Talk, and there was a very high-profile guest in attendance this year. Jay-Z delivered a short statement to the assembled marchers, standing alongside Martin’s parents, Sybrina Fulton and Tracy Martin.

Thank you Jay-Z for showing up for Trayvon Martin’s family for so many years.

It means the world to them that you have supported them throughout their journey. https://t.co/M9NBCIHaw5

“Thank you all for being here, it’s very important,” Jay-Z said. “The support that you guys are showing, and the strength that Sybrina and Tracy and the family are showing, and we want to make sure that we stand in support. And we never forget, and Trayvon serves as a beacon of light to the people out here, so you guys will never have to go through the pain and the hurt that these guys went through.”

“And his name will sit alongside some of the greats, who lost their lives to push our culture forward―the Martin Luther Kings, the Gandhis―that’s the intention that we set,” he continued. “That his name serves as a beacon of light and hope to push us in a better direction.”

Trayvon would have been 23 today. Who knew his life would shine a light on racial injustice and misconceptions. You were worthy Trayvon. We are worthy. In your name……We continue the fight❤ pic.twitter.com/LLkVuEqUzB

Martin’s shooting death at the hands of Zimmerman became a massive national news story, and it ultimately gave way to a heavily scrutinized murder trial. Zimmerman was acquitted of murder, successfully employing a claim of self-defense. Regardless, countless people still believe the 17-year-old was unjustly slain and that Zimmerman was the beneficiary of a racist criminal justice system. As such, Martin remains to this day a solemnly remembered and mourned victim for many and as an emblem of racial justice activism.

The killing and subsequent acquittal helped lay the foundation for the Black Lives Matter movement, which exploded onto the national scene in 2014 following the police shooting of Ferguson, Missouri teenager Michael Brown.