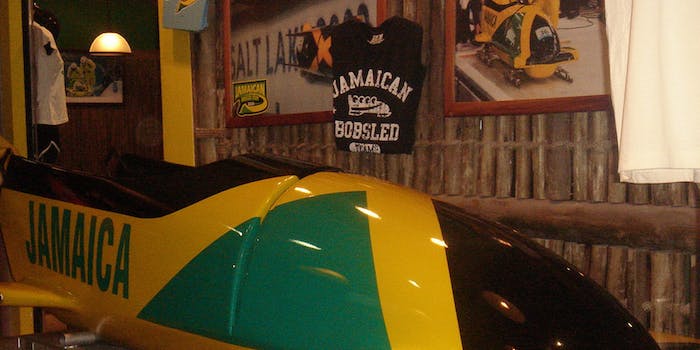 The Jamaican bobsled team is crowdfunding its way to Sochi

The famous Jamaican bobsled team could be heading to the Olympics for the first time in more than a decade.

The famous Jamaican bobsled team could be heading to the Olympics for the first time in more than a decade. It’s got the Internet to thank.

The team, made famous in Cool Runnings, has qualified for the Sochi Winter Olympics in a single event only: the two-man bobsled race. But the last two times the teams were close to qualifying, in 2010, they were unable to actually make it to the final qualifying race due to lack of funds. It will take around $40,000 just to get the team to the Olympics and enable them to buy a second pair of runners for their sled.

Imagine going to the Olympics with only one set of blades for your skates; sled runners are a bit more expensive.

When the news of the team’s qualification landed on Twitter Saturday, #CoolRunnings trended and Reddit let out a victory cheer. But it will take more than love to make the 1988 Cinderella team of Cool Runnings happen again. But through various crowdfunding channels, the team is turning to the Internet with their characteristic optimism, asking for $80,000 to send them to the Olympics for the first time since 2002.

The team is pulling out all the stops, launching campaigns on Crowdtilt and IndieGoGo, and even accepting donations directly through PayPal. Users of the meme-inspired digital currency Dogecoin have stepped in to help, too, creating dogesled.net to send support. So far they’ve donated about 26 million dogecoins.

The head of the team is driver Winston Watts, who came out of retirement to lead the team to the Olympics but poured so much of his own money into the project to help get them there that he had to skip the entire European leg of the bobsled trials. “It’s not been cheap,” he told the BBC on Sunday. The Telegraph reported that so far, the Jamaica Olympics Association has not stepped in to help Watts and the team’s other member, Marvin Dixon. Watts told the BBC that he’d chipped in about £100,000, or more than $160,000, of his own money over the years for a chance to bring the team back:

“Not having a team in the Olympics for so many years is sad and it’s been eye-opening for the nation.

“Qualifying would mean so much to Jamaica and it would be making history again.”

Evidently it would mean a lot to the Internet as well. As of this morning, the crowdfunding campaigns are robust. Crowdtilt has generated nearly $20,000, IndieGoGo over $6,000. And the Dogesled team has funneled the equivalent of over $30,000 to the team—$25,000 of it coming from a single anonymous donation, according to the group’s Twitter. That leaves them within sight of the goal, after only a day of Internet celebration.

And hopefully, in February, we’ll be celebrating with them at Sochi.