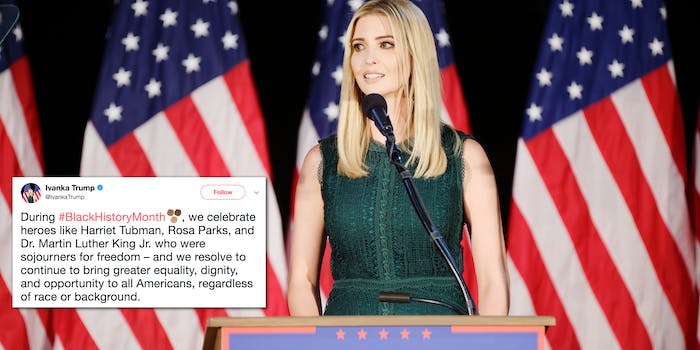 The women in the Trump family kicked off the beginning of Black History Month doing the absolute bare minimum: tweeting about it.

Melania Trump’s tweet was downright hysterical. She called for a “celebration of diversity,” using a word that the Centers For Disease Control and Prevention isn’t allowed to use anymore thanks to an edict from her husband’s administration.

Today marks the start of #BlackHistoryMonth Let this be a time to come together in a celebration of diversity.

People on Twitter were quick to point out the hypocrisy of her message and asked her if her husband would be participating this month as well.

Can you say that to your husband? #Trump

With all due respect it is not a generic "celebration of diversity". It is to honor and remember the history of Black America. Including the first Black president that your husband discredits, and peaceful protests like kneeling for the anthem. cc @JoyAnnReid @angela_rye

But Ivanka Trump’s tweet was the real icing on the cake.

During #BlackHistoryMonth, we celebrate heroes like Harriet Tubman, Rosa Parks, and Dr. Martin Luther King Jr. who were sojourners for freedom – and we resolve to continue to bring greater equality, dignity, and opportunity to all Americans, regardless of race or background.

Upon first read, it seems nice. She starts off strong with her nods to Harriet Tubman, Rosa Parks, and Dr. Martin Luther King Jr., although we couldn’t help but notice she left out other Black leaders less popular among white people, like Nat Turner and Malcolm X.

But then she veered totally off course with the second part of her message.

“…we resolve to continue to bring greater equality, dignity, and opportunity to all Americans, regardless of race or background,” she said.

Emphasis on all Americans.

People on Twitter called out Ivanka for all the things wrong with her message.

Unless they live in Puerto Rico. Right Ivanka??

Maybe tag your father, I don't think he knows…

Are you high?
April Fool's Day is on April 1st. February 1st is the beginning of #BlackHistoryMonth

"– and we resolve to continue to bring greater equality, dignity, and opportunity to all Americans, regardless of race or background." pic.twitter.com/j1ZyCq7tHK

Wow, you just whitesplaid all over #BlackHistoryMonth

Ivanka and Melania missed the point that Black History Month is about celebrating Black people—not all the people who just so happened to have benefited from the efforts of Black people.