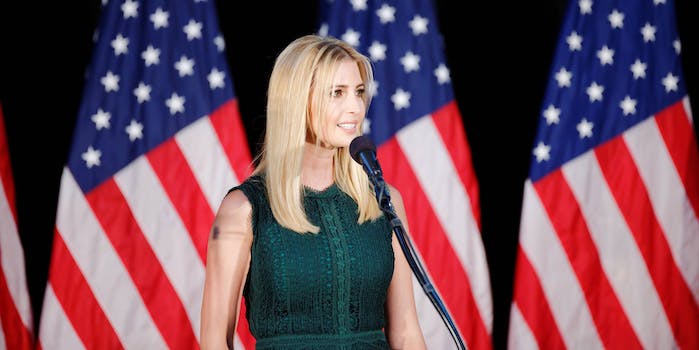 Workers were putting in twice the legal maximum of monthly overtime.

Workers at a Chinese factory that makes designer clothing are working nearly 60 hours a week for $62, according to a new report from the Fair Labor Association—and the factory is connected to President Donald Trump‘s eldest daughter and unpaid advisor, Ivanka Trump.

According to the Fair Labor Association’s report, auditors in October found two-dozen violations, including the 80 workers putting in 42 to 82 hours of monthly overtime above the legal maximum of 36 hours per month. Workers were also found to be paid $255 to $284 per month, which the association said is near or below China’s minimum wage.

The report, which was published Monday, came one day before Ivanka Trump spoke at a panel for the international W20 summit for women’s empowerment in Berlin, Germany. Throughout her father’s presidential campaign and in the role of his unpaid advisor, Trump has championed women’s issues and gender equality in the workplace, such as paid maternity leave and equal pay. Trump stepped down from her management position at her company for the administration position in March.

A spokeswoman for Trump forwarded NBC News’ request for comment to her fashion company, which did not respond Wednesday. G-III, however, told the outlet that its factories are routinely audited, and said that the discovered violations have either been or are in the process of being corrected.