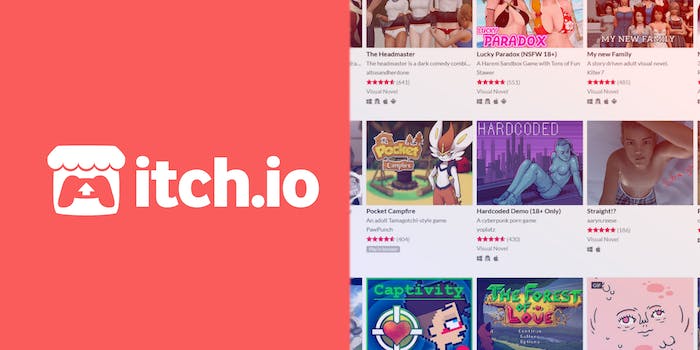 Itch.io is not the NSFW, LGBTQ safe haven you think it is

Valve’s Steam is back in the news again after banning yet another adult video game. Itch.io, one of its smaller, oft-praised competitors, is in the same boat.

Despite claims to the contrary, the two marketplaces have more in common than they do not. I know this as a queer adult creator. Instead of championing one company to spite another, the games industry must take a collective step back and look at the facts.

Itch.io is just a temporary accommodation that LGBTQ creators and adult developers may need to leave out of necessity in the near future.

Itch.io, meanwhile, was brought up in the ongoing Epic vs. Apple lawsuit. Epic Games now offers access to itch.io’s storefront app through its Epic Games Launcher. During the case, Apple’s lawyer criticized itch.io for its “so-called ‘adult’ games,” bemoaning Perverteer’s Sisterly Lust for advertising fetishes “that are not appropriate for us to speak in federal courts.”

“There are many games on itch.io. I won’t even read the names out loud, but they are both offensive and sexualized,” Apple’s lawyer stated, according to Kotaku.

Apple’s rough treatment toward itch.io was later criticized by game developers and even lampooned by itch.io’s Twitter account. Games industry members like Double Fine’s community and content manager Heather Alexandra stressed itch.io “is not some depraved place,” but one for inclusion and artistic integrity.

“The games found there do tremendous work in furthering the medium and 95% of the reason it’s even being targeted is because it is a sex-positive, LGBTQIA friendly storefront,” Alexandra warned.

It’s true that itch.io is one of the last major open marketplaces left to marginalized game developers. Censorship is rare on itch.io. While Steam regularly pulls adult games and has a tepid relationship with the LGBTQ community, itch.io is far more friendly to its queer and NSFW creators.

But don’t mythologize the website. Itch.io is not a DIY art space run out of a queer art group’s Brooklyn basement, nor is it a collectively-owned marketplace where users can post and sell as they please. Itch.io is owned by Itch Corp and, according to PCWorld, was inspired by another company-owned open marketplace: Bandcamp.

Itch Corp, like every other privately-held company, exists to make money and assure its longevity. That’s it.

Games media generally depicts itch.io creator Leaf Corcoran as an independent, developer-first marketplace curator that contrasts sharply with Steam’s cold rules and nonsensical regulations. The Verge wrote flatteringly of the small-staffed Itch Corp in 2018, describing Corcoran as someone who “actually gives a shit,” perhaps to the point of burnout (“I haven’t really taken a proper vacation in a long time,” Corcoran told the Verge).

Karp, like Corcoran, set out to do something different, and gave queer pornographers a safe place to call home for years. But we all know how this story ended. Eventually, Tumblr was sold off to Yahoo, then became part of Verizon. By 2018, Tumblr abruptly banned adult content from its platform and began one of the highest profile users exoduses (and falls from grace) in online history.

If Tumblr’s legacy showed us anything, it’s not to grow too attached to your online home. When you’re forced to work and create in a world where major corporations control your entire internet experience, one man’s best intentions do not make a platform invincible from capitalism’s creeping hands.

There’s an essay by game developer Badru in which he lays out the case against itch.io’s “moral validation” in the games world. Declaring itch.io “just a silicon valley startup with a rainbow pin,” he warns the games industry’s obsession with itch.io is rooted in an “aesthetically-anti-capitalist posture” that masquerades financial privilege.

In other words, it’s easy to hype up working exclusively with itch.io if you can afford to only exclusively work with itch.io. But for queers who rely on their games to pay the bills, it’s not itch.io that keeps rent paid; it’s Steam.

Praise itch.io as we may, the platform is only as friendly to queer smut peddlers as its payment processors allow us to keep using it. Because itch.io is a company seeking longevity, don’t expect itch.io to go down with the pornographers it seemingly holds dear, no matter how many funny tweets its Twitter account makes.

I do not criticize itch.io lightly. As a queer NSFW developer, I’ve had quite a bit of success hosting 18+ games on the site. I have two kinky adult video game series exclusively available on itch.io, Blood Pact and She Hungered, which have made a couple thousand dollars combined. I have a third game on the way which I plan to host on itch.io as well. I enjoy using the platform and find it successfully connects me with my core demographic. For now, it is a good home, and I encourage others to use itch.io, too.

But pack your bags, have a backup plan in place, and avoid falling in love with the site and its indie aesthetic. When you’re a marginalized artist, an exodus is always on the horizon, and itch.io will never be an exception to the rule.