Whatever you might think of the current conflict in Gaza, it’s hard to deny that sex and geopolitics are never a good mix, as we saw with the controversy over the NSFW Facebook page to raise IDF soldiers’ morale.

Apparently, however, Jason Sterling and Edan Twena, two Israelis living in Toronto, Canada, didn’t get the memo (re: not using the ground invasion in Gaza as an opportunity to make awesome sex puns). They’re currently spearheading an Indiegogo campaign for “Iron Dome Condoms,” named after the Israeli missile defense system, which they say is an attempt to promote “safe sex for a safe Israel.” 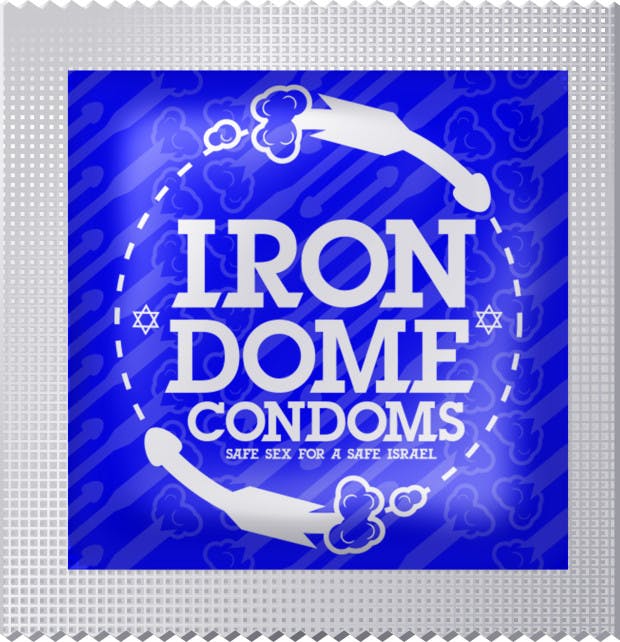 According to the Indiegogo campaign description, Sterling and Twena are trying to raise $18,000 “for the defence of Israeli citizens from the threat of terrorist rockets.” 25 percent of the funds they raise will go to the Israeli Defense Force and the Iron Dome Defense Project, the missile defense system blocking Hamas rockets, while 50 percent will go to manufacturing T-shirts, hats, and, of course, prophylactics with the Iron Dome Condoms logo. Their goal: “Protect against rockets. Protect against STDs.”

Depending on where your political sympathies lie, you’ll likely find this project either a) quirky and adorable, or b) outrageously insensitive to the plight of the 1,800 Gazan civilians and 64 Israeli soldiers who have been killed so far in the conflict. (As of this writing, Israel and Hamas have entered the second day of a temporary ceasefire.) Alternatively, you could feel the same way I do about it, and just think it’s c) kind of dumb.

The Indiegogo campaign for the Iron Dome Condoms has so far been unsuccessful: It’s only raised $436 so far, or 2 percent of its $18,000 goal.