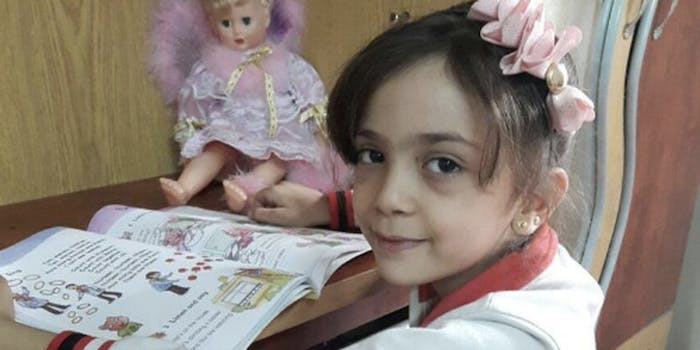 Is there any reason to doubt the validity of the girl tweeting from Aleppo?

After tweeting she was captured, the 7-year-old returned to Twitter Tuesday.

Bana Alabed, the 7-year-old who’s been tweeting the devastating realities of war-torn Aleppo, has captured the attention and hearts of people worldwide since her mother started her account three months ago. So it’s no wonder that this weekend, after her Twitter was deleted, some feared she’d been captured. When she returned just days later, others questioned if the whole thing was a sham.

We are sure the army is capturing us now. We will see each other another day dear world. Bye.- Fatemah #Aleppo

Hello my friends, how are you? I am fine. I am getting better without medicine with too much bombing. I miss you. – Bana #Aleppo

The New York Times reports yesterday that the sophistication discrepancies in grammar and language in her tweets, as well as a scripted nature to her videos, have left people wondering if some of her accounts are staged. “It’s always a question of whether a 7-year-old is being used as a propaganda tool, and if so, by whom,” Jane E. Kirtley, a professor of media ethics and law at the University of Minnesota, told the Times. “Sometimes we fall in love with a concept and basically ignore things that would undermine that concept, and ignore things that should be red flags.”

The concern about the validity of Bana Alabed’s account is not without precedent. In 2011, a blogger going by the name of Amina Arraf went viral with her site, A Gay Girl in Damascus, only to be discovered—after her “abduction”—that the woman hailed by the Guardian as “a heroine of the Syrian revolt” was the work of one Tom MacMaster.

And yet, the Times acknowledges that its own reporters have Skyped with Alabed and her mother and that the location of some of her tweets have been verified by satellite maps. In the end, it seems the people crying “fake” the loudest are your standard internet trolls who love a good jihadist conspiracy theory. But you can decide for yourself by reading more here.