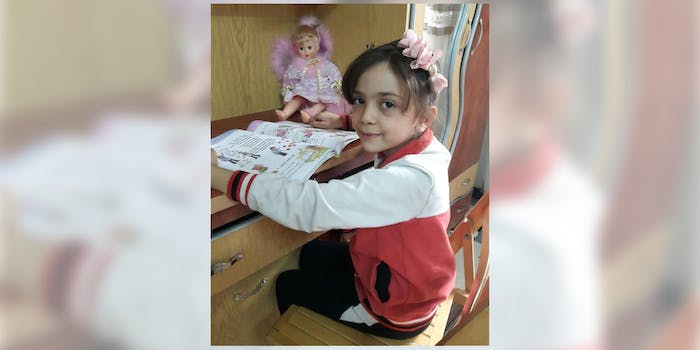 For months, 7-year-old Bana Alabed has tweeted the realities and horrors of living in Aleppo, through bombings and attacks by the Syrian government. Over 100,000 followers were following her and her mother’s account, responding with messages of love and solidarity. However, yesterday her account was deleted.

The last tweet from the account read, “We are sure the army is capturing us now. We will see each other another day dear world. Bye.- Fatemah #Aleppo” On Dec. 1, she also tweeted “We give up on life.”

The Alabeds live in the eastern part of Aleppo, which is controlled by rebels and under attack from the Syrian government. Last month, Alabed’s mother told CNN that their house had been bombed and that they had been forced into the street.

People are tweeting their support, though Syrian journalist Zaina Erhaim claims that the Alabeds deleted their account out of safety concerns.

#BanaAlabed & her mam r fine & still n #aleppo. They decided 2 disappear 4 a reason. Plz respect that & let them have thier privacy. #Syria

According to Al-Jazeera, the Syrian government now controls about two-thirds of former rebel ground in east Aleppo. Today, the UN Security Council will vote on whether to demand a ceasefire and for humanitarian access to trapped residents.