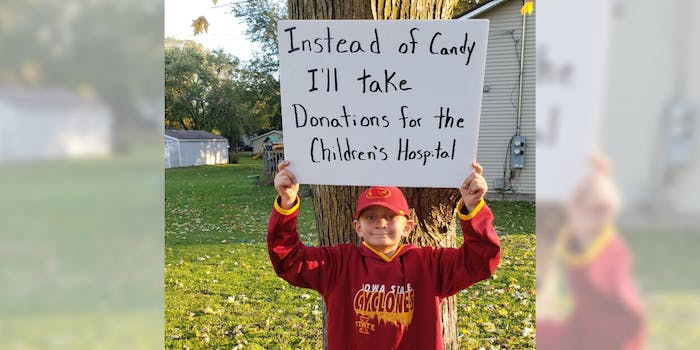 This Halloween, an Iowa boy decided to dress up as Carson King, the football fan who raised over $3 million for charity when his sign went viral and later lost a deal with a major beer company after his racist tweets surfaced.

Photos shared to Facebook show the boy, Sam Hall, wearing an Iowa State University Cyclone hoodie and cap as he holds up a sign like the one that made King famous.

“Root beer supply needs replenished,” Sam’s sign read. On the back of the sign, Sam wrote that instead of trick-or-treating candy, he’d take donations for the University of Iowa Stead Family Children’s Hospital.

“Sam decided what he wanted to be for Halloween about a month ago and has not wavered a bit! His uncle talked me into opening a Venmo account so he can donate money to the U of I Children’s Hospital. Just like Carson,” his mother, Cindy Sobaski Hall, wrote on Facebook on Thursday.

Sam’s mother shared an update last Friday and revealed that Sam was able to raise $4,700 for the children’s hospital.

“Sam is a Superhero,” wrote King, a 24-year-old who works security at a casino. In August, King held up a sign seen in the bleachers on ESPN’s College Gameday and asked viewers to send beer money to his Venmo account.

After he raised more than $600, he decided to donate the funds to charity. Busch Light and Venmo made their own donations to the children’s hospital. Anheuser-Busch distanced itself from King after a reporter dug up racist tweets he wrote in high school comparing Black women to gorillas and making light of the Holocaust.