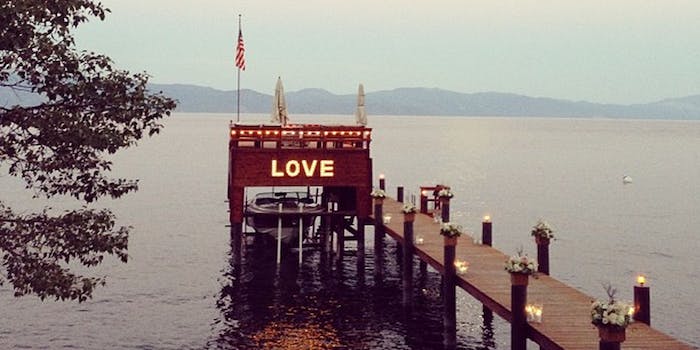 You've Instagrammed a wedding. The New York Times has space to fill in the "Vows" section. Any questions?

The New York Times wants your wedding-themed Instagram photos to fill its pages.

The Vows section of the paper plans to infrequently publish a selection of readers’ filtered photos that “capture a detail, a personal moment or a feeling from your wedding or a celebration you attended.”

The images can be from any time or place, and don’t necessarily have to fit the current theme (right now, the Times is looking for snaps that show “how wedding rituals are evolving”).

What the paper of record has absolutely no interest in is generic photos, like the betrothed couple in a posed snap or a humdrum table setting. No one really cares how nice your name card looks at Cousin Sally’s elephant-themed ceremony, but grab a ‘Gram of her riding in on an actual elephant, and you might have a shot at being featured. The Times also wants photos to “tell a personal story,” and to have a “description of the idea your photo represents.”

It seems to be part of an effort by the Grey Lady, which featured an Instagram photo on its front page in March, to get more involved with its community. The paper has started toying around with making relevant comments more prominent by pulling them alongside stories.

On the other hand, it’s a way for the Times to fill some space (or a pageview-vacuuming slideshow, it ominously warns) without having to pay anything for snaps. That’s a precarious business, considering the backlash against the Chicago Sun-Times after it booted out 28 photojournalists and asked reporters with smartphones to capture incidents.

If relying on Instagrams from amateur photographers to fill the wedding section is the way of the future, at least the Times was on it enough to cover the trend a few months back.