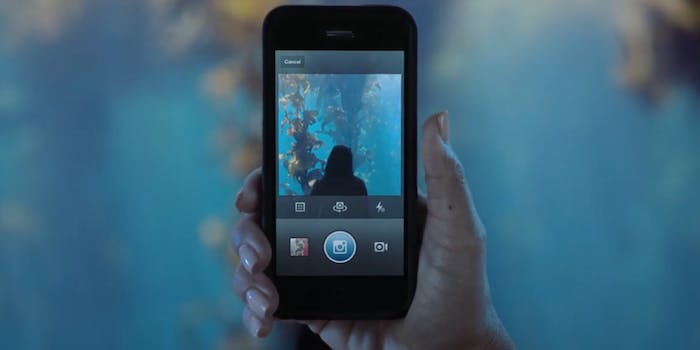 Instagram's main advantage: Its trademark photo filters have been adapted for video.

Instagram is about to get a whole lot noisier—and go head-to-head with Twitter’s Vine. Users will now be able to capture and share video.

At a press event, Facebook CEO Mark Zuckerberg and Instagram CEO Kevin Systrom revealed the big update for the community.

“At our core, visual imagery is everything,” Systrom said. “We are forever on a quest to take a moment and record it forever in time. … Instagram is a tool to remember.”

Video’s a big part of that vision, he argued. Here’s how video on Instagram looks.

The updated Instagram apps have a movie camera icon, where you can record videos of up to 15 seconds long. You’ll be able to delete a shot in your video you’re maybe not quite pleased with, and retake it without having to start your video from scratch.

What’s really interesting is that you’ll be able to add Instagram’s iconic filters, albeit ones created specifically for video, to your clips. That’s perhaps the most difficult problem Instagram’s had to tackle to make this work without taking ages to process on your phone.

Additionally, you’ll have the option to take a scene from your video and use it as the clip’s thumbnail, and use a stabilization tool to fix shaky clips.

Systrom and his cofounder Mike Krieger had the idea to include video on Instagram at its inception, but decided to focus first on photos.

An Instagram video function had been subject of much speculation in the leadup to Facebook’s event. With Vine a clear success for Twitter (there were more than 13 million users even before the Android app was released earlier this month, and millions of vines are posted every day), it seemed inevitable that Facebook would try to get in on the mobile video action.

You cannot yet tag people in videos as you can in photos, and nor can you upload a video you’ve already shot and saved on your phone.

Adding filters to videos is something you can’t do with Vine. Nor can you ditch a shot you’re unhappy with. On the other hand, Instagram’s videos won’t loop, which is a key selling point for Twitter’s video-sharing service.

Instagram’s drawn the battle lines with Vine. How the war plays out is yet to be seen.