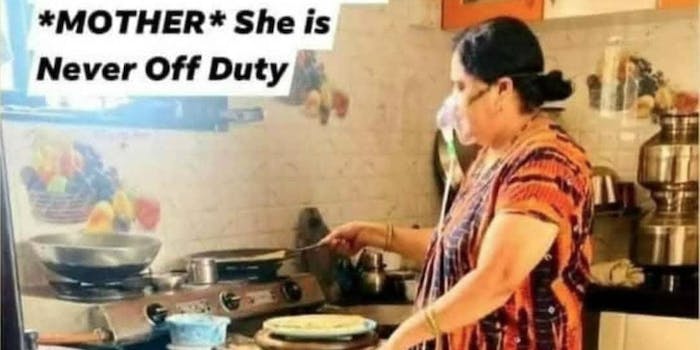 'Can this unconditional love trope that forces women to not take rest stop already?'

A photo of an Indian mother cooking while on oxygen support has sparked widespread debate online over the treatment of women amid the coronavirus outbreak.

Posted to Instagram on Friday, the picture, which comes as India grapples with a massive uptick in Covid-19 cases, shows the mother alongside the caption: “Unconditional love = mother. She is never off duty.”

While the picture may have been attempting to extol the work ethic of mothers, social media users took issue with the messaging.

For starters, many pointed to the dangers of having a large oxygen source right next to a gas stove.

And although the origins of the picture remain unclear, many argued that it reinforced toxic norms regarding the role of mothers in society.

“Can this unconditional love trope, that forces women to not take rest, stop already?” @Chinmayi asked.

Some asserted that “glorifying” the sacrifice of women has become a popular social norm in India.

“Glorifying women’s misery, sacrifice and pain is a norm in our country … ” @pradhan_rich said. “‘She is never off duty’ has been said proudly often in our society … The reality is you never gave a chance to her being off duty.”

Although a few users appeared to appreciate the photo, the majority seemed to be opposed.

“[B]ro a mother is never off duty that doesn’t mean you’ll let her work when she’s ill and also glorify this brutality, wtf is wrong with you!?” @JulnAWonderland added.

Statistics from the Johns Hopkins University COVID-19 Map indicate that more than 26.5 million people in India have been diagnosed with COVID-19, with a death toll approaching 300,000.