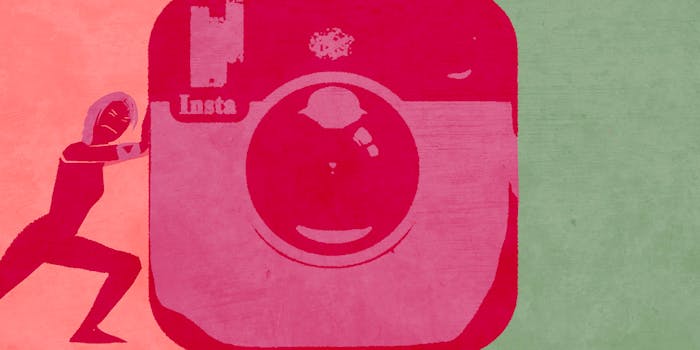 Why is Instagram censoring so many hashtags used by women and LGBT people?

An overview of the popular photo app's banned tags shows a disturbing trend.

We first discovered last July that Instagram had banned the hashtag #goddess.

On Wednesday, we discovered that the problem was much bigger than just two banned feminism-centered hashtags. According to research compiled by Nick Drewe for his social data blog the Data Pack, the list of censored Instagram hashtags is long and slightly disturbing.

Not only were #goddess and #curvy still banned, but so were tags like #woman, #women, #womencrushwednesday, #bi, #lesbian, #lesbiansofinstagram, #gays, #iamgay, and multiple other tags that represent identities.

What’s up with Instagram censoring women and the LGBT community?

The Daily Dot sent a request for comment to an Instagram spokesperson on Wednesday evening and will update this story when a reply is received.

An Instagram spokesperson told the Daily Dot in July that the company was working to restore the tags and that misused tags are only blocked temporarily.

In this case, #goddess was consistently being used to share content that violates our guidelines around nudity. We’ve taken similar action on dozens of hashtags because they were being used to share inappropriate content. We’re working on a way to more quickly restore certain hashtags that have previously been blocked.

Drewe researched the censored tags using the company’s own API platform, which allows developers to create pairing applications and companies to track user data. He explained on the Data Pack blog that he wrote a program to double-check whether tags listed as banned in the API were, in fact, still blocked.

Some temporarily hidden tags bring up a limited set of “top posts” and a message that explains the current blocked status of the tag. But on Wednesday, a series of searches for tags like #women and #lesbian revealed that sometimes an explainer pops up, while sometimes searching for the same hashtag reveals nothing at all.

For example, typing #lesbian into the search field brings up a blank—other than the tricky #lësbian workaround that is full of photos. But if you type just the word “lesbian” into the search field without a hashmark, then a smattering of top photos appears along with an explainer about why the rest are hidden. 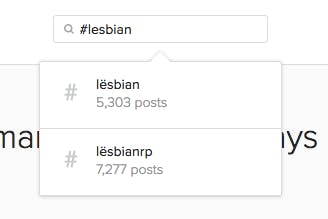 While the overview of Instagram’s currently banned tags doesn’t make the app look LGBT- or woman-friendly, other terms on the list of censored tags are just plain weird.

Yet those hashtags are all currently censored—and as with the 10-month wait for #goddess to return, it’s unclear whether they will ever be restored.