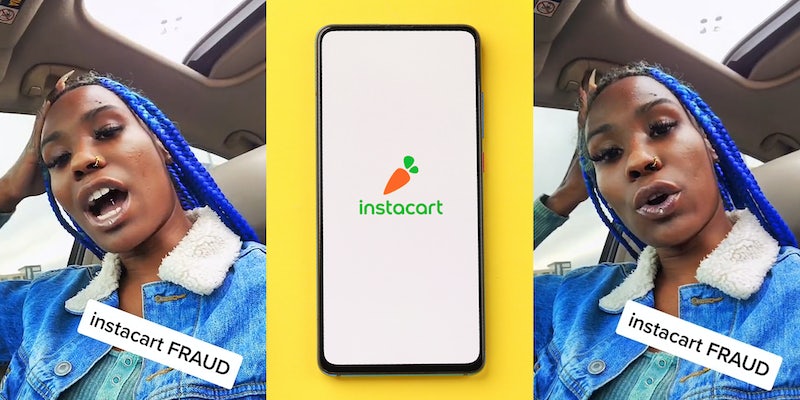 ‘The most disgusting form of fraud’: Instacart shopper calls out tip-baiting customer who removed $5 tip after friendly interaction

'Y'all do know that affects us, right?'

An Instacart shopper has renewed the controversial topic of “tip-baiting” by posting a TikTok video explaining how it happened to her.

Tip-baiting occurs when customers add a large tip before getting their delivery order, in hopes of receiving it faster. Then, they remove or reduce the tip after the order has been delivered. The Daily Dot has previously covered several DoorDash and Uber Eats drivers complaining about the trick.

In her video, Monroe says one of her recent Instacart customers acted friendly to her when she delivered his order but later removed his $5 tip after she left. The customer called her “my Black sister” and told her son “thank you my Black brother,” she claims.

Given his thankful attitude during their interaction, Monroe doesn’t understand when or why the customer had an issue to the point where he decided to take back his tip.

The TikToker adds that she followed the customers’ extensive delivery instructions, including bagging every item, using produce-specific bags for the produce and waiting for him to accept the items in person. She says he had a “full list of notes” for the order. Despite following the instructions, she didn’t get her $5 tip from the man.

“Y’all do know that affects us, right? While you talking about all that ‘Oh, my beautiful Black queen’ and all this extra shit—keep it,” Monroe says. “Keep that. Half of y’all I see through, but keep it. Because one thing about me, I’m gonna report you.”

Monroe says she reported the customer for tip-baiting and has no qualms about reporting any other customers who do the same.

“When you deal with me and you wind up getting a deactivated account, just know I’ve reported you,” the TikToker says.

She says tip-baiting is “the most disgusting form of fraud” that a customer can commit. She adds that the customer had no reason to remove his tip because he got his order on time and she was “nice and friendly” as always.

In her video’s caption, Monroe called on Instacart to take action against tip-baiting customers, “@instacart DO BETTER!! PROTECT OUR TIPS.”

Some viewers agreed with the TikToker, saying Instacart shouldn’t allow customers to remove their tips after receiving their orders.

“Instacart should not give them the option to take it back,” one viewer commented.

“They need to take off that feature I remember people changing their tip because the store didn’t have what they wanted like that’s my fault,” another viewer commented.

Others shared their guidelines for tipping properly.

“I always tip because I appreciate you guys shopping for me. Tipping is a must,” one user wrote.

Another said, “I tip the basic and if service is fab I’m like ok let’s up that amount.”

The Daily Dot reached out to the creator via TikTok comment and to Instacart via email.