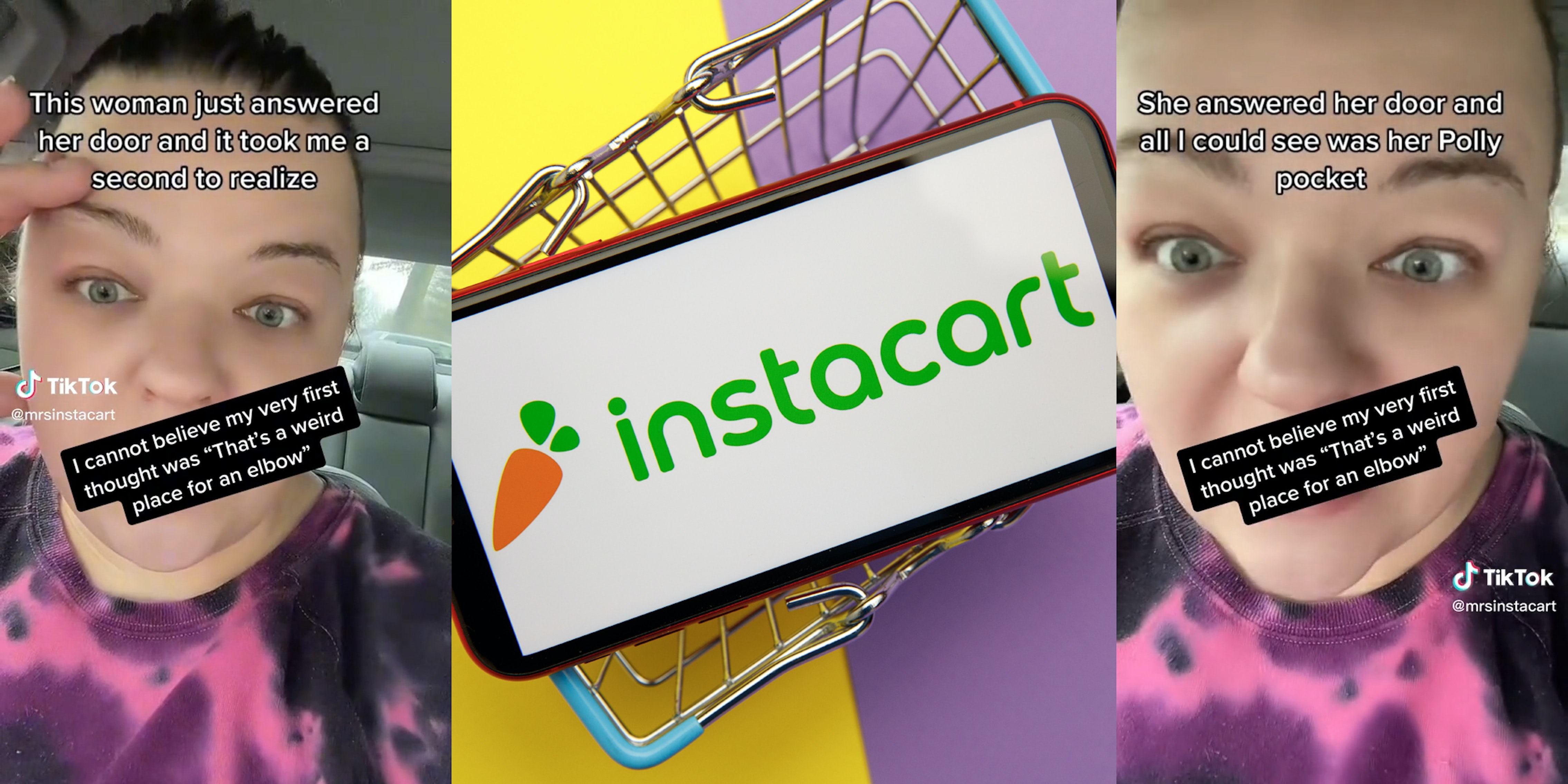 ‘All I could see was her Polly Pocket’: Instacart shopper says customer answered her door naked

A full-time Instacart shopper who goes by Stew Thief on TikTok (@mrsstealyostew) said that while delivering groceries for the application she came across a customer who reportedly answered the door with her genitals on full display.

One of the benefits of ordering from a food delivery service is being able to receive groceries from the comfort of your own home. All one needs to do is answer the door when the delivery driver arrives and accept the groceries, or you could even request that they just leave it at the front door and not disturb you.

However, according to the TikToker, this customer didn’t select that option and instead chose to physically take the items from her delivery driver, and exposed herself in the process.

In a follow-up video, the TikToker decided to divulge more information on her experience with the nude Instacart customer. She says that she picked up an order that netted her $11, which included four Tall Boy cans of beer, two boxes of Woodbridge Chardonnay, along with a box of frozen White Castle cheeseburgers, and one tray of fresh sushi.

The TikToker explains that the woman lived in a garden apartment building and that there was a handicap ramp leading up to the apartment. The screen door had a glass covering, with the bottom half of the glass raised up. The TikToker assumed that she would pass the items through the opening in the screen door, which she says, “trained” her eyes “in a downward position” meaning she was “looking down through the opening.”

Before the Instacart customer came to the door, a dog approached the entrance and began sniffing around, but wasn’t barking at the shopper. After a few seconds, however, she says that a “flesh koozie” came into her view, as her eyes were looking down at the dog and the entranceway she thought she was going to put the groceries through.

“My very first thought was: that is the weirdest looking elbow I’ve ever seen,” the TikToker recalls.

She adds that she has not “seen too many tuna tacos out in the wild” and that “it almost looked like a fortune cookie.” After the encounter, she says that she was stunned and didn’t know how to react and stood there, unmoving.

The woman at the front door then slowly shut the door, leaving the shopper there with the groceries she was supposed to deliver. Because it was an alcohol order, she had to scan the customer’s ID and couldn’t just leave the booze at the door. After waiting for about four minutes, the TikToker turned around to go and right at that moment, the door opened. It was at this time that she said she made an “executive decision” to not “make eye contact,” she says, because she had already made “clam contact.”

However, this was impossible as she had to verify the woman’s ID, and the customer held the card up to her face. When the Instacart driver met eyes with the woman, she says that “she raised her eyebrows and gave this weird smile” which she pantomimed as a suggestive gesture. “I have thought about that look in my mind 731 times; was she hoping for some pearl polishing?” @mrsstealyostew says. “I’m serious was that eyebrow raise her way of saying she was hoping I was gonna be yodeling in the canyon? Because it definitely was giving lick-a-chick vibes, y’all.”

If that was the case, she notes that the “$4 was not gonna get [her] an oyster gargling.” The customer ultimately apologized for the wait, saying that her dogs were “brats.”

The Daily Dot has reached out to @mrsstealyostew via TikTok comment and Instacart via email for further information.

Other delivery drivers on the platform appear to have had similar run-ins with customers themselves.

“Girl you clearly have not been delivering down in stone mountain off memorial drive bc after 10pm they all answer the door like that,” one commenter wrote.

Another said, “I swear you delivered to my old neighbor! 1time had 2 call PD on her, she answrd w her pants at ankles! Lady cop wsnt impressed!”