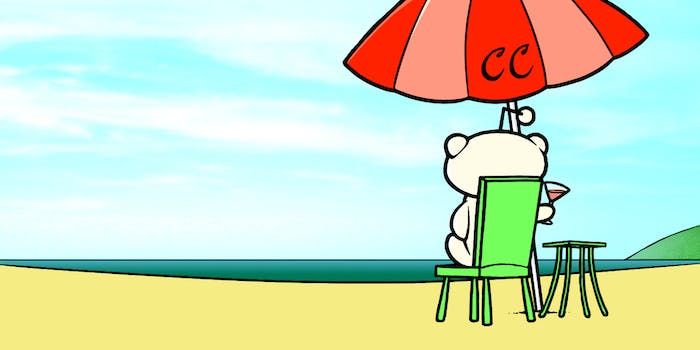 Inside Century Club, the exclusive playground for Reddit’s karma kings

In September, a mysterious persona called UpMan made Internet history.

I first heard about Reddit’s Century Club in September, after a mysterious persona called UpMan made Internet history.

In just 11 days, the redditor collected 100,000 points of comment karma—otherwise meaningless Internet points that give prolific Reddit users clout. Karma is Reddit’s virtual voting system. It rewards users for providing the community with content and commentary.

UpMan had a ton of it—and he got it faster than anyone, ever. (The previous record holder was someone called prostitute_strangler, who accomplished the feat in 22 days.)

The more upvotes a post collects, the higher probability it has of reaching Reddit’s front page. The more upvotes a comment receives, the higher chance it has of rising to the top of a thread. All these upvotes and downvotes are tracked, and the sum total becomes a user’s karma score. Folks with a truckload of karma—like andrewsmith1986, a prolific power user, who had more than 1.2 million points by the time he left Reddit for good—become legends on the site. But it’s hard to pinpoint exactly how much their influence is worth.

So how did UpMan do it? And why?

To him, gaming Reddit was a fun challenge, like exploiting a glitch in Legend of Zelda: Ocarina of Time. He browsed new threads that were gaining upvotes quickly, he told me. And he learned as he went on: “I didn’t realize that r/askreddit threads gained upvotes slower, but had much higher upvoted comments, till a week or so into the account. If I had to do it over, I would definitely aim more comments at r/askreddit threads, which probably would have got me to 100,000 even faster.”

Naturally, there were a few people UpMan wanted to impress. And when they found my story about him, they weren’t happy.

The Daily Dot’s report on UpMan’s karma record did not go over well on Reddit—specifically on r/centuryclub, a private, invite-only subreddit that requires each user to have more than 100,000 karma points. It’s like a secret clubhouse for Reddit’s top performers.

Why didn’t they like it? Because apparently, UpMan’s feat just wasn’t special, one r/centuryclub member told me. This kind of thing happens a lot.

“There’s a decent amount of comments where people are just criticizing you guys for thinking it’s a big deal in the first place,” wrote “Michael,” a r/centuryclub member. He asked for his name to be withheld. 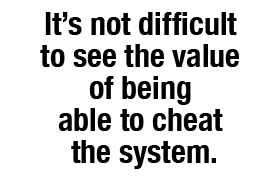 The Century Club was created by Reddit power user trapped_in_reddit, notorious for taking content from other users and posting it as his own (a practice otherwise known as “karma-whoring”). Members of r/centuryclub include maxwellhill (who has 2.1 million link karma and is moderator of default subreddits like r/funny, r/technology, and r/worldnews), apostolate (1.4 million comment karma), and andrewsmith1986 (a former moderator of the r/AskReddit, r/pics, and r/IAmA subreddits who either had his account banned or he deleted it himself in December). The subreddit has about 350 members, but only 30 or so are active.

Century Club moderator preggit has a favorite game to play. He calls it the Century Club Contest. The objective: flood Reddit with submissions pertaining to a specific theme. The winner: whoever collected the most karma for it. The contest has featured rainbows, closets, and owls. On this day, Sept. 5, the theme was mole rats. 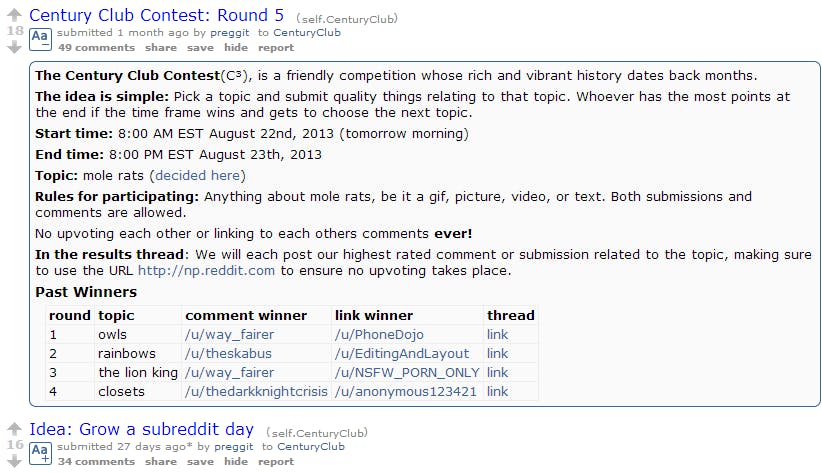 The following screengrabs are from another, more open-ended, theme day, started by user EditingAndLayout. 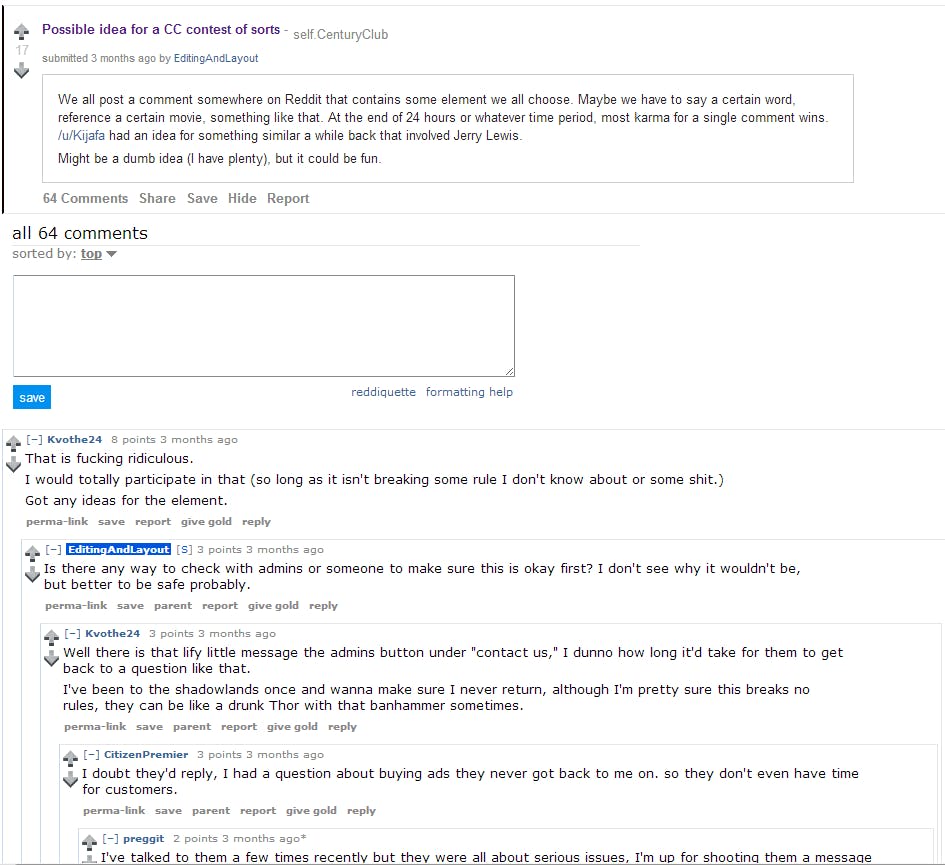 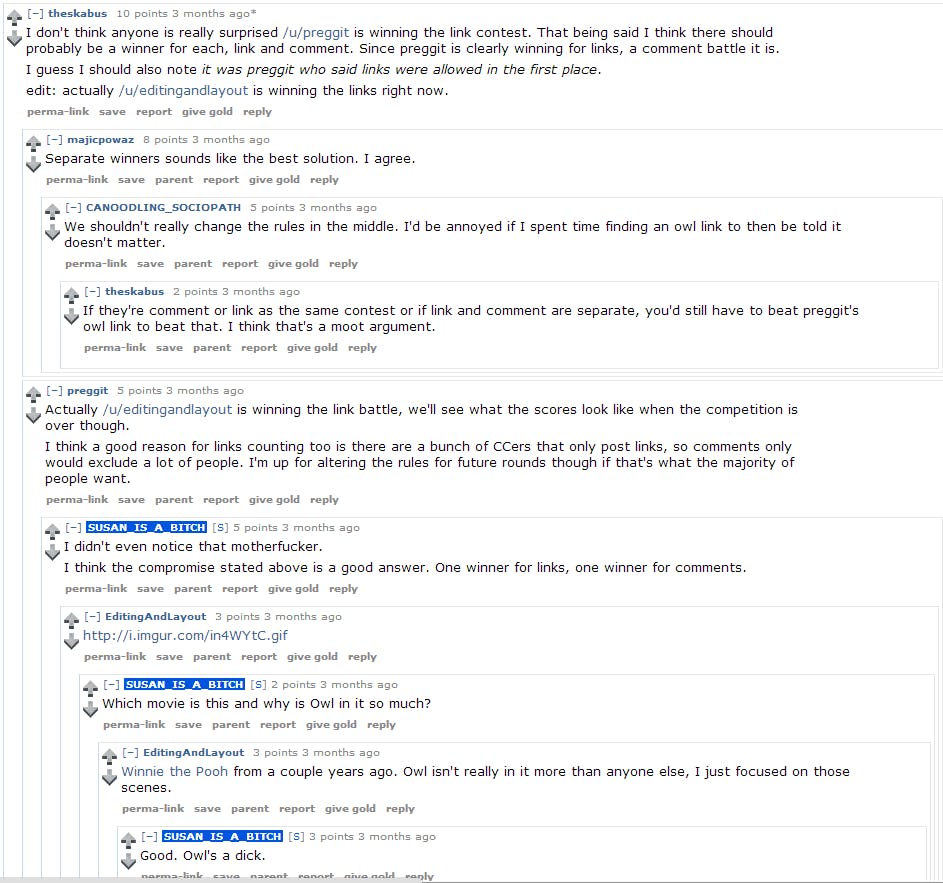 Both contests’ results are unclear. But according to Michael, the owl theme day earlier this summer resulted in four front-page posts.

“It’s interesting that (forgive the dramatic language) it’s being ‘orchestrated behind the scenes,’ where the majority of Reddit’s ‘democratic’ user base doesn’t have access,” Michael added in a message to me.

The other game r/centuryclub likes to play is called “grow a subreddit day.” Users decide what forum they should grow through promotional comments made in other subreddits.

The first subreddit was r/naturegifs. In five months, it collected more than 7,000 subscribers. Not exactly explosive growth, but still significant.

For the most part, the Centurions, as they’re called, have used their power simply for lulz. But the games have raised concerns among other redditors, who worry that by teaming up to influence the success of certain content, they’re compromising Reddit’s democratic nature.

As one of the top 50 most visited sites in the world, Reddit’s front page directs millions of readers and, as a result, serious advertising money to any site that can reach it. In November, Reddit collected 90 million unique visitors. It’s not difficult to see the value of being able to cheat the system.

In mid-September, Century Club’s antics caught the attention of high-ranking moderators. Word got out that their games were under review. Centurions were playing with fire here and risking a Reddit-wide ban, warned user Farisr9k on Sept. 19. 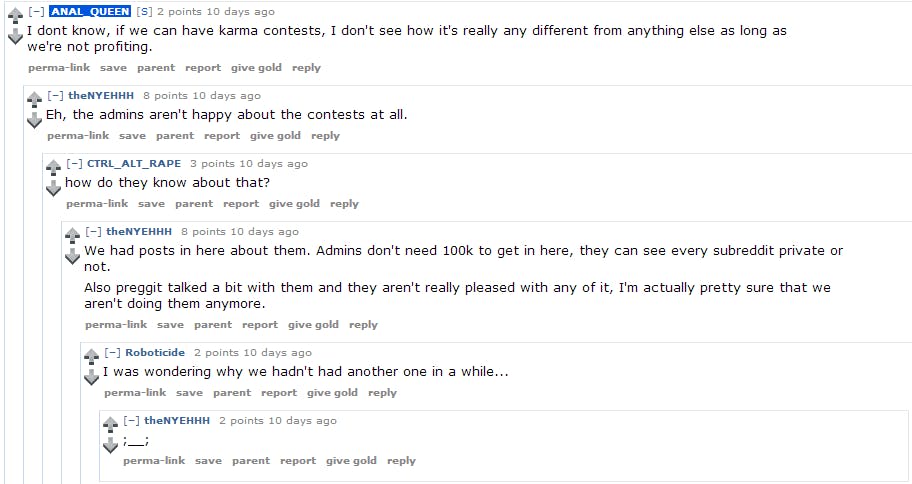 Since this incident, Michael admitted that the threats worked. In the past three months, the Century Club challenges have all but ceased. There’s been much less Reddit-wide interest in the forum.

Perhaps that’s because two even more exclusive subreddits have popped up since Century Club took off. One of them is called r/TripleCenturyClub. It’s even more exclusive. The name suggests 300,000 karma points will grant you a membership.

“Because Reddit is continuing to grow, it’s kind of inevitable for the ever-growing base of super-active users to get together and talk to each other in some way, and the fact that it’s on Reddit itself is fitting,” Michael said. “I think that over time the influence they have over ‘mainstream Reddit’ will continue to grow.”