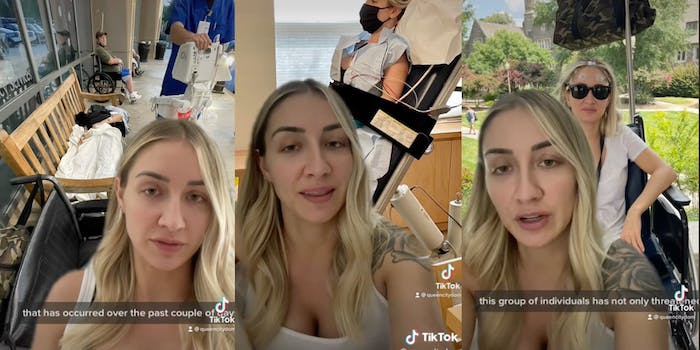 Influencer’s GoFundMe under investigation after she was accused of faking disorder, linking it to the COVID vaccine

'This woman is a fraud and should be held accountable.'

A GoFundMe campaign for an influencer is under investigation, according to Too Fab, after she was accused of falsely claiming the coronavirus vaccine gave her a tic disorder.

Dominique De Silva, known online as @queencitydom, is a real estate agent based out of North Carolina. De Silva says she was previously diagnosed with Hashimoto’s disease and claims that she was diagnosed with Dystonia, a movement disorder that causes involuntary muscle contractions, after receiving the first dose of the Pfizer COVID-19 vaccine.

Videos of De Silva have been scrutinized by people online, with many accusing the influencer, who boasts nearly 100,000 followers on her Instagram account, of faking her disorder or falsely linking it to the vaccine. “This woman is a fraud and should be held accountable,” one said online of De Silva. One video, in particular, featuring De Silva‘s alleged tics went viral on the “I am a total piece of shit” subreddit on Friday.

The GoFundMe, “Help Dominique recover from the COVID-19 vaccine,” was set up on De Silva’s behalf by a friend of hers named Micah Rose. “If you would like to assist with Dominique’s financial burden, any donation through GoFundMe will be greatly appreciated. All funds raised will go directly to cover Dominique’s medical costs as she continues to search for answers so she can not only help herself but possibly help others like her who are struggling in finding the right help,” the GoFundMe reads.

Days after her videos went viral, GoFundMe reportedly announced that it would issue $17,000 in refunds to those who had donated. The GoFundMe has received $1,000 in donations since the platform announced it was investigating the fundraiser.

“I can confirm that our Trust & Safety team is investigating and has reached out for more information,” a spokesperson for GoFundMe told Too Fab. “If any donor would like to request a refund in the meantime, we will process it for them. Fundraisers raising money to promote misinformation about vaccines violate GoFundMe’s terms of service and will be removed from the platform. Over the last several years, we have removed over 250 fundraisers attempting to promote misinformation related to vaccines. It’s important to know that the platform is backed by the GoFundMe Guarantee, which means funds are guaranteed to go to the right place or donors will get a refund.”

De Silva did not respond to the Daily Dot’s numerous requests for comment via Facebook and Instagram. However, she did address the speculation in a video on TikTok.

“First I want to say that I don’t owe anyone an explanation,” De Silva says in the Aug. 22 video. “But I do want to address a situation that has occurred after the past couple of days. Apparently there were a group of individuals who posted me in a thread, claiming that what I have been going through over the past five months is fake. This group of individuals has not only threatened myself and my family, but also my friends and anyone who has supported me throughout this journey.”

De Silva says she was asked by GoFundMe to provide documentation of her ongoing medical treatment.

“This is for those who are attacking me while I’m trying to recover from my injury. I don’t judge you for questioning me, because you don’t know me personally. But what I do judge you for is putting someone who is already going through enough, through more. I’ve also had my GoFundMe reported so many times that I’ve had to provide invoices and doctor information, which is totally OK because I have plenty of that.”

This isn’t the first time someone has claimed a vaccine caused Dystonia. In 2009, a woman named Desiree Jennings claimed the flu vaccine gave her Dystonia. In that case, according to the Dystonia Medical Research Foundation, the incorrect diagnosis was given.

The Dystonia Medical Research Foundation addresses Jennings’ story on its “Common Misunderstandings” section of its site.

“There is no evidence that vaccinations cause dystonia. The DMRF asked a panel of preeminent movement disorder experts to examine this closely several years ago when a story surfaced of a woman who claimed to have developed ‘dystonia’ following a flu immunization. It was later established the dystonia diagnosis was not correct. In contrast, preliminary research suggests certain vaccinations may actually be protective against certain forms of dystonia,” the Dystonia Medical Research Foundation notes.

Dr. Abinish Virk, infectious disease specialist at Mayo Clinic and co-head of its vaccination programs told the Daily Dot that while he has not heard of a patient contracting involuntary movements after receiving a COVID-19 vaccination but that “neurologic symptoms have been reported with COVID-19 infections.”

In a post that gained many sympathetic comments on her Instagram account, De Silva said she received the vaccine with the intention of keeping those around her “out of harm’s way.”

“I made the decision to get my vax before I left Las Vegas to move back to my home state of North Carolina because I wanted to play it safe,” De Silva wrote. “I also do have underlying autoimmune issues which I have openly talked about for a while now.”

De Silva said she is not ashamed of her reasons for getting the vaccine. “I know my heart was in a good place and my intentions were pure… and yet here I am struggling with adverse side effects from this life changing decision,” she wrote.

That post, along with others, however, received adverse reactions across other platforms such as Reddit, where some users are accusing De Silva of being an anti-vaxxer. Some even claimed they sent or are going to send in an anonymous tip to the local police department about De Silva.

The Daily Dot has reached out to GoFundMe.