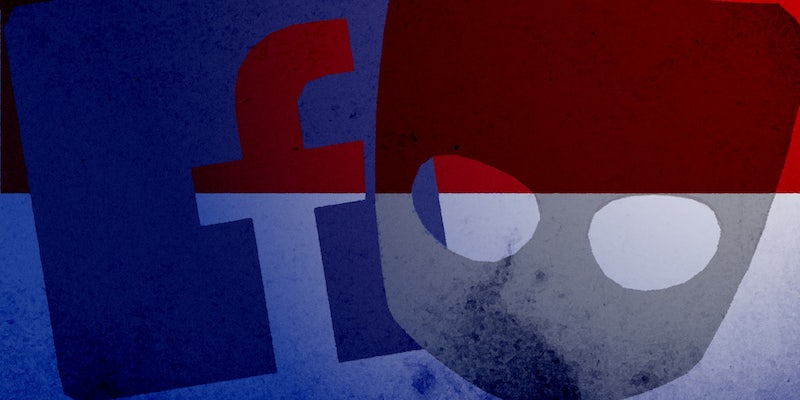 The country is also considering a ban on gay sex.

According to the Jakarta Globe, police are calling for Grindr and 17 other apps to be banned after an alleged gay prostitution ring was busted in West Java.

“We have requested the Ministry of Communications and Information Technology to follow up on the findings,” said Himawan Bayu Aji of the National Police cyber-crime unit in a statement Thursday.

The police unit claimed that a gay prostitution ring operated with “148 victims,” 27 of them being teenage boys between 13 and 17. The Jakarta Globe and other Indonesian news sources also reported that police contacted the suspects through Facebook, attempting to set up dates. Once the three suspects were arrested, one of their iPads was searched—where police said they found Grindr and 17 other gay-related apps.

Police said the communication ministry would be investigating Grindr (but not Facebook, even though that website was the one used in the sting). The Daily Dot reached out to Grindr for comment but did not immediately receive a response.

But the true motivation for banning gay dating apps like Grindr is questionable, considering Indonesia is currently enduring a judicial review that could ban gay sex. The country’s top court is considering a case brought by a conservative Islamic group that wants to see homosexuality made fully illegal in a country where it is already taboo.

“We see the moral degradation that is happening,” Rita Hendrawaty Soebagio of the anti-LGBT Family Love Alliance told the AFP newswire in early August. “This is purely because of our love for our nation, we must do something while we have a chance.”

Indonesia has been ramping up homophobic policies all year, with the Ministry of Communication and Informatics announcing in February that it would ask companies like Facebook and WhatsApp to ban LGBT-related emoji and stickers. Messaging app Line buckled to the pressure, announcing in February that they would block all LGBT-related stickers from being seen or used in the country.

The Human Rights Watch letter recounted a slew of incidents in January where police harassed and arbitrarily arrested members of the LGBT community—resulting in trumped-up charges, threats, and growing homophobic sentiment in the country’s population.