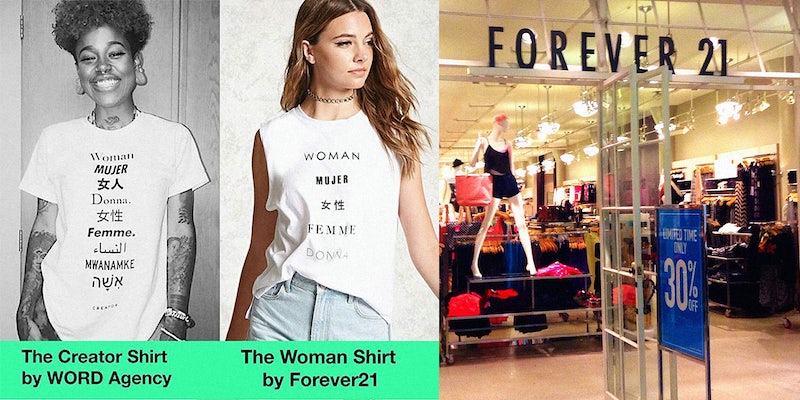 In the battle over stolen work, social media may just be indie designers’ greatest weapon

Forever 21 swiftly pulled a shirt after the original aritst's allegations went viral—could this be part of a bigger trend?

You have probably seen the “Creator Shirt.” It’s emblazoned with the word “woman” translated into multiple languages. It’s crisp, white, and was created by the Word Agency, which gives 25 percent of the shirt’s profits to Planned Parenthood.

“These shirts were created to support women, all women,” Zoila Darton, co-founder of Word Agency, tells the Daily Dot via email. “They were our way of resisting while wearing our feminism on our sleeves and helping people directly support Planned Parenthood, an organization that has been there for both of us in various stages of our lives.”

But not long after the shirt made its debut, Darton’s mission of “supporting women” was flipped over and stomped on. A design looking remarkably similar to the “Creator Shirt” appeared on Forever 21’s website.

After seeing their work was being copied and being sold—and without any intention of its proceeds being donated to charity—Darton and the Word Agency took to social media with their anger and frustrations. Their posts spread like wildfire. More than 76K people retweeted just this single tweet.

Stories like this have become all too familiar. Over the past two years, big brands ripping of indie artists and designers have made more than a few headlines. In 2016, Tuesday Bassen, a Los Angeles-based clothing and accessories designer, broke her silence about her legal battle with Zara. After she noticed what looked like near-identical copies of her pin badges on the fashion giant’s site, her lawyer sent a cease-and-desist letter. The story went viral. Not only because of the duplication, but the reply from Zara made the public aware of the David-and-Goliath dynamic facing many indie designers:

“The lack of distinctiveness of your client’s purported designs makes it very hard to see how a significant part of the population anywhere in the world would associate the signs with Tuesday Bassen…please note that such notifications amount to a handful of complaints only; when it is borne in mind that millions of users worldwide visit the respective websites monthly (Zara: 98,000.000 average monthly visits last year.)”

Not long after Bassen spoke out, the designers behind lines Doodlecats and Boy Girl Party also came forward, telling customers that their designs had been copied by national accessories chain Francesca’s. While Forever 21 has been named and shamed more than once, Zara, in particular, comes up again and again. Adam J. Kurtz, BALL & CHAIN CO., Big Bud Press—so many artists have designs that appear to be co-opted by the Spanish clothing company.

As we see this problem more and more—in a time when designs can be spotted on an artist’s social media account and replicated almost instantaneously—what options do artist have? And why does it keep happening?

At first glance, cases like Darton’s and Bassen’s might seem like intellectual property issues that can easily be cleared up through copyright law. But it’s not so straightforward. You are protected by copyright as soon as you create a work—without needing to register it—but you do need to register the work if you want to defend the copyright legally.

In other words, if you’ve registered the copyright before it is infringed upon, seeking damages in court is much easier. But if you only register it after the infringement has occurred, things get complicated.

“Everybody should systematically register their work before they’re ready to disclose it to the public,” Jane C. Ginsburg, a professor of literary and artistic property law at Columbia Law School, tells the Daily Dot.

I've been pretty quiet about this, until now. Over the past year, @zara has been copying my artwork (thanks to all that have tipped me off–it's been a lot of you). I had my lawyer contact Zara and they literally said I have no base because I'm an indie artist and they're a major corporation and that not enough people even know about me for it to matter. I plan to further press charges, but even to have a lawyer get this LETTER has cost me $2k so far. 〰 It sucks and it's super disheartening to have to spend basically all of my money, just to defend what is legally mine. ⚡️ EDIT: Some of you are asking how you can help. Repost and tag them, on Twitter, on Insta, on Facebook. I don't want to have to burden any of you with the financial strain that comes with lawsuits.

The registration process is straightforward and only costs $35. But many designers don’t realize that they need to do so, and then when they register the copyright after the infringement has occurred and try to seek damages, they have to prove the amount of their lost sales and of the infringer’s profits. Also, simple designs may prove a difficult case to build on. “The less there is to your work, the more someone else can evade protection you might have,” Ginsberg adds.

All in all, the whole ordeal can be difficult, time-consuming, and, of course, costly. “Having a lawyer on retainer is prohibitively expensive for most small brands,” designer and creative consultant Nicolette Mason told the Daily Dot, “and engaging a lawyer for single issues is also a huge expense and not an investment many individuals can afford to make.”

That being said, some artists have gone the legal route. When the Daily Dot reached out for comment from DoodleCats, one of the brands copied by Francesca’s, the company replied: “Our lawyer has advised us not to talk about it. Sorry.” Adam J. Kurtz, a designer ripped off by Zara who has been vocal in his support for Tuesday Bassen’s similarly said, “I do know that she’s not able to comment on this at all due to ongoing legal process.”

Indie designers, it seems, are not going to be pushed around so easily.

Pushing back by continually speaking out

But taking legal action isn’t an option for everyone. So Kurtz has set up the online shop Shop Art Theft. The site featured products ripped off by Zara and lets people buy the originals instead. It also provides side-by-side comparisons, allowing shoppers to see just how close some of these copies are. The site is beneficial to the artist, in part because it sends business their way. But it’s about more than that.

“While I can’t be specific for legal reasons, the website did help give us a sense of power both in terms of the narrative (we’re established artists who Zara could have chosen to hire or collaborate with if they wanted to) and in terms of finding a silver lining (helping use our collective reach to support each other instead of feeling hurt and alone),” Kurtz told the Daily Dot over email. “Being a unified group and sharing press assets also helps us spread our story further.”

He says he’s acted as a sort of press contact, connecting media requests with artists and supporting other creatives by share resourcing. “Having work ripped off takes an emotional toll that’s separate from the loss of income and ‘um it’s fully illegal wtf’ elements of it,” he said.

Not to mention, there’s also power in numbers.

Social media as a weapon

For Bassen and many other artists, the social media response has been swift. Shops caught copying designs are inundated with tweets, comments, and posts. And it’s not just internet fodder—these responses are starting to have a powerful impact.

“Honestly, yes, we were surprised at how fast they removed the shirt from their site,” Darton told the Daily Dot via email. “The news spread like wildfire on social as well as traditional media and that definitely was a huge reason why they pulled it. Aside from tagging them on our original social media post on Instagram and Facebook, we didn’t contact them. People really got behind us and our cause and the fact that the shirt was created for a good cause added fuel to the fire.”

Like Darton notes, a large social media response leads to traditional media picking it up. After Darton’s story ran in Jezebel last week, Forever 21 swiftly put out a statement:

“The shirt in question was bought from a third party source. As soon as Forever 21 was alerted to the issue, we respectfully removed it from our website. Because this product did not have trademark or IP protections, there were no red flags raised at the time of purchase.”

Darton thinks the company can do better than that. “We would like to see Forever 21 donate to profits from their version of the shirt to Planned Parenthood,” she says.

While the quick resolution to Darton’s case might be a singular instance, the fact that retailers are so consistently pilloried in the media and by customers still signals a nudge toward positive change. “Even if you can afford to bring an action, you may have more effective redress in trying to shame the other side,” Ginsberg says when it comes to social media.

Which is why we might be hearing about more of these cases: Fashion giants aren’t necessarily ripping off indie designers any more these days than they were 20 years ago; social media has just given these artists a tool to be heard—and they’re using it.

While bad press and annoying Twitter mentions are not great reasons to respect original artistry, if it gets companies to pull down copied work—and hopefully someday refrain from copying work altogether—it’s a step in the right direction. The next massive step would be to commission these artists and pay them for their work accordingly.