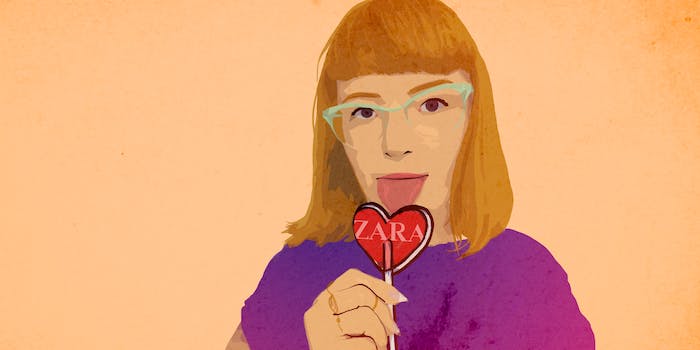 The internet has chosen sides—and it wants to topple the huge fashion brand.

Tuesday Bassen is a Los Angeles-based clothing and accessories designer whose work refers heavily to comic book illustrations and a 1950s girl gang aesthetic. Her popular logo “mixed emotions club,” emblazoned across the back of a satin baseball jacket, as well as pins and patches, has become a sort of coveted alt-girl version of the Birkin bag.

It’s not as if Bassen is entirely unknown (she told the Daily Dot her website gets about 8,000 visitors per day), which is why she was taken aback by Zara‘s response to a cease-and-desist notice her attorney sent the giant corporate fashion house after it appeared to have completely ripped off Bassen’s work.

The lack of distinctiveness of your client’s purported designs makes it very hard to see how a significant part of the population anywhere in the world would associate the signs with Tuesday Bassen…please note that such notifications amount to a handful of complaints only; when it is borne in mind that millions of users worldwide visit the respective websites monthly (Zara: 98,000.000 average monthly visits last year.)

According to Zara, it’s cool to rip off a young indie designer as long as no one knows who they are.

But the fashion house didn’t seem to factor in the power of the internet. Bassen’s 94,500 Instagram followers and 11,200 Twitter followers went on a rampage on her behalf after she posted an excerpt of the Zara letter alongside comparative images of the pins and patches in question on Tuesday night.

I've been pretty quiet about this, until now. Over the past year, @zara has been copying my artwork (thanks to all that have tipped me off–it's been a lot of you). I had my lawyer contact Zara and they literally said I have no base because I'm an indie artist and they're a major corporation and that not enough people even know about me for it to matter. I plan to further press charges, but even to have a lawyer get this LETTER has cost me $2k so far. 〰 It sucks and it's super disheartening to have to spend basically all of my money, just to defend what is legally mine. ⚡️ EDIT: Some of you are asking how you can help. Repost and tag them, on Twitter, on Insta, on Facebook. I don't want to have to burden any of you with the financial strain that comes with lawsuits.

The accusations quickly spread online, with fans of Bassen’s work tweeting at Zara and bombarding the fashion house’s Instagram account with hundreds of comments. 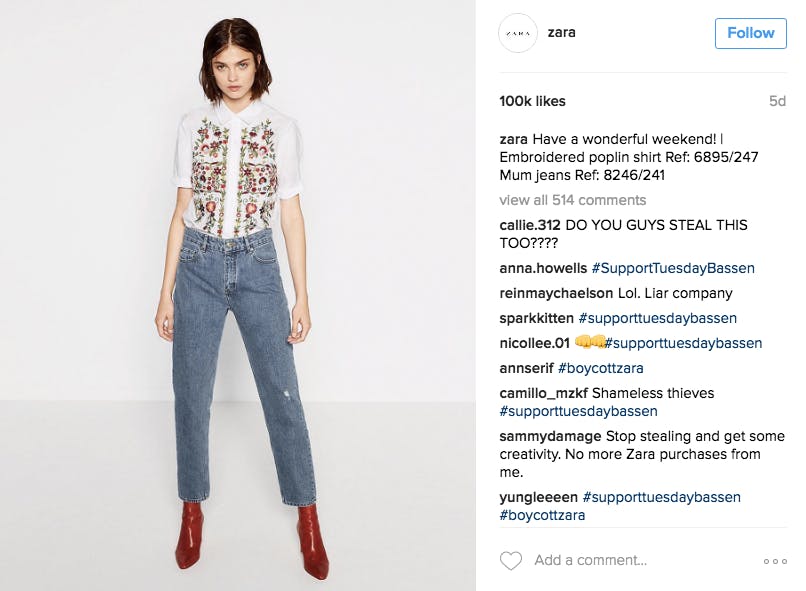 As of Wednesday morning, Bassen told the Daily Dot that she hasn’t heard a peep from Zara.

“Zara has not yet contacted myself or my lawyer since this story has (thankfully) taken off,” said Bassen in an email to the Daily Dot on Wednesday. “When we contacted them, they waited until the final day they had to respond and I expect them to further drag it out.”

She also explained why it’s important for indie designers to fight for credit: It’s not just about finances, but about the integrity of her own brand.

“It absolutely hurts my business and waters down the brand I’ve slowly built based around my original artwork,” Bassen told the Daily Dot. “Not to mention, the financial impact it’s had on me from literally being stolen from. It’s unfair that I’ve had to spend $2,000 defending something that is rightfully mine, just to get a dismissive and condescending letter.”

The hashtag #SupportTuesdayBassen spread on both platforms as well, but as other designers pointed out on Wednesday—this was hardly the first time Zara and other fashion corporations had been accused of blatantly ripping off young, lesser-known designers.

Companies like @zara make it a business plan to steal designs from indie artists & condescend when you want payment. pic.twitter.com/YKG3RxShCD

The company was accused of ripping off New York street artist Patrick Waldo in 2012, of indie fashion line Sibling in 2014, and even other major fashion houses like Celine, Alexander Wang, and Balmain.

. @Zara should just start hanging tags "Copied from" on their clothes. At least consumers would be better informed of design origins.

Besides Zara, large fashion corporations have been blanketed with accusations of design theft over the years. Constant appropriation has become something of the norm according to fashion insiders, but many are frustrated by the business trend nonetheless. And often, there’s not much small indie designers can do about it.

According to designer and creative consultant Nicolette Mason, trademarking your designs is expensive and takes a long time to get approved. Even having a lawyer who can go to bat for you is no mean feat.

“Having a lawyer on retainer is prohibitively expensive for most small brands,” Mason told the Daily Dot via text message on Wednesday, “and engaging a lawyer for single issues is also a huge expense and not an investment many individuals can afford to make.”

Bassen tweeted that it cost her $2,000 just to have her lawyer send a letter—so yeah, that’s not something every small designer can do.

I want to point out that most artists don't even get this far. Tthe "luxury" of spending $2k for a lawyer to write a letter (1/2)

is something most artists cannot afford. This is for me and this is for every single artist that can't do anything. (2/2)

But the question remains: Why is a huge fashion brand like Zara allegedly relying on repeated theft in order to create new lines? Don’t they have, like, hundreds of people working for them who can come up with original ideas?

According to Mason, many of those workers are trying to emulate underground trends by any means necessary.

“Tuesday’s success has been so organic, but you can’t compare to a brand that has tens of millions of customers worldwide,” said Mason. “While designers and buyers (like those on Zara’s teams) might be tapped into design trends and see how Tuesday Bassen’s work has become popular, the average Zara shopper is not.”

Update 4:40pm CT, July 20: A spokesperson for Zara’s parent company, Inditex, told BuzzFeed News, “Inditex respects any third party’s creativity and takes all claims concerning third party intellectual property rights very seriously. On receiving these allegations, the relevant items were immediately suspended from sale and an investigation opened. In parallel, Inditex’s legal team also contacted Tuesday Bassen’s lawyers to clarify and resolve the situation. Inditex has more than 600 designers in house that create more than 50,000 designs a year, it has the highest respect towards each individual’s creativity and will investigate this specific case to its end.”