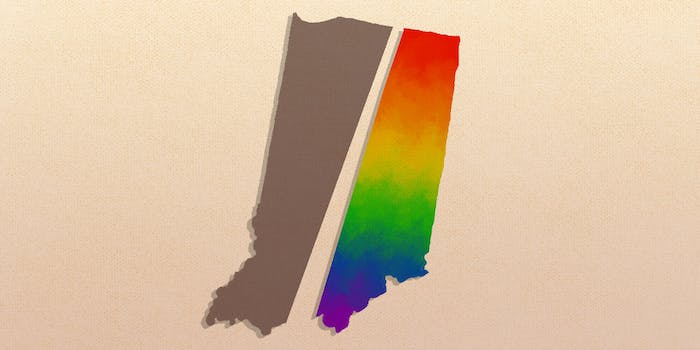 Hopefully this will change enough minds to make a difference.

The Indianapolis Star devoted Tuesday’s entire front page to its emphatic opposition to a new Indiana law that opens the door to discrimination.

S.B. 101 is called the Religious Freedom Restoration Act (RFRA), but in reality, it allows private businesses and individuals to discriminate against anyone, particularly gay and lesbian people, by citing their religious beliefs. Indiana Gov. Mike Pence (R) and the state legislators who supported the bill have received a torrent of criticism from inside and outside the state, and some companies and state governments are suspending business with Indiana.

On Tuesday morning, Indianapolis Star subscribers saw this when they picked up their paper.

“Gov. Mike Pence and the General Assembly need to enact a state law to prohibit discrimination in employment, housing, education and public accommodations on the basis of a person’s sexual orientation or gender identity,” the Star‘s editorial board wrote.

In keeping with the demographic trend of urban areas being more liberal than rural areas, Indianapolis, the state capital, is politically opposed to the actions of the conservative state legislature. Indianapolis Mayor Greg Ballard stressed on Monday that the RFRA did not represent the views of his administration or his city.

Many in the Star‘s newsroom have embraced their paper’s bold layout decision and the accompanying editorial.

Gov. Pence has embarked on a defense of S.B. 101, claiming that he law is “not about discrimination” and promising that state legislators would seek to “clarify” the law’s intent with new legislation.