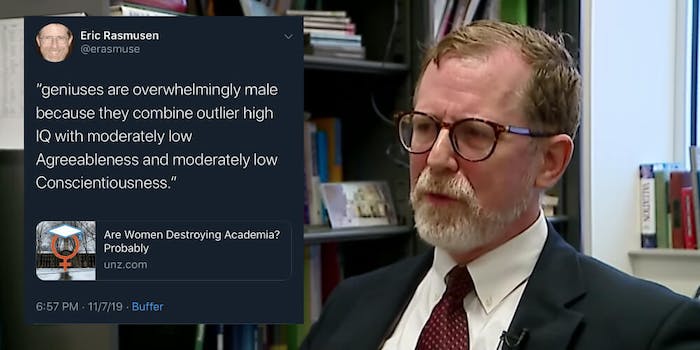 Professor put on blast for ‘racist, sexist, and homophobic’ tweets to continue teaching

Indiana University defended the professor's first amendment rights after SheRatesDogs called him out.

A professor at Indiana University will keep his job, despite coming under fire for a sexist tweet that recently went viral.

“Man you guys know I hate leaving names in, but this can’t continue being a thing,” the popular account wrote.

Man you guys know I hate leaving names in, but this can’t continue being a thing pic.twitter.com/T4hmcSIpfp

In the tweet, Rasmusen quoted and linked to an article, titled “Are Women Destroying Academia? Probably.”

“Geniuses are overwhelmingly male because they combine outlier IQ with moderately low Agreeableness and Moderately low Conscientiousness,” Rasmusen quoted the article as saying.

Others in the comments posted more alleged sexist and racist tweets.

SheRatesDogs accompanied the screenshot with another of a DM from a concerned student who first brought the tweet to the account’s attention.

“I’ve already reported it to the school (and plan to reach out to more faculty members) and I got the student newspaper to write an article about it, but I’m trying to spread as much awareness as possible,” the student wrote in a DM to SheRatesDogs. “Luckily he’s not my professor but still…”

In a statement sent out to business students on Nov. 20, Lauren Robel, executive vice president and provost, condemned Rasmusen’s “racist, sexist, and homophobic views,” but defended his first amendment right.

“His expressed views are stunningly ignorant, more consistent with someone who lived in the 18th century than the 21st,” Robel said in the statement.

The statement, which is titled “On the First Amendment,” announced that the university would not be firing Rasmusen.

“We cannot, nor would we, fire Professor Rasmusen for his posts as a private citizen, as vile and stupid as they are, because the First Amendment of the United States Constitution forbids us to do so,” Robel said in the statement.

Robel stated the university would only have grounds to fire Rasmusen if his views impacted his grading or decision making at work.

“If Professor Rasmusen acted upon his expressed views in the workplace to judge his students or colleagues on the basis of their gender, sexual orientation, or race to their detriment, such as in promotion and tenure decisions or in grading, he would be acting both illegally and in violation of our policies and we would investigate and address those allegations according to our processes,” Robel said in the statement.

In response to the statement, Rasmusen not only defended his words but doubled down on some of his views.

“I am on record as saying that homosexuals should not teach grade and high school. I don’t think they should be Catholic priests or Boy Scout leaders either,” Rasmusen said in a post on his website.

Students will not be forced to take classes taught by Rasmusen, and a double-blind grading system is being enforced for his class, according to Robel.