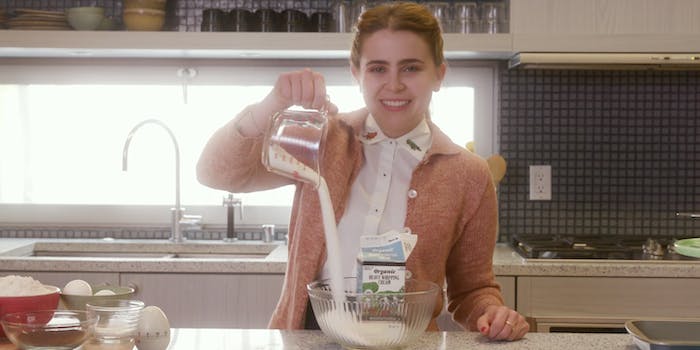 Why not learn about fake abortion clinics while (not) baking a cake?

In the Kitchen, a new webseries created by L.A. comedian and producer Chloe Sanders and released by Elizabeth Banks’ female-focused comedy studio WhoHaha, proves just that. In the Kitchen is half cooking show, half PSA, combining the classic “how to make this delectable dish” format with sharp criticisms of what reproductive justice looks like in the Trump era.

Each episode runs about three minutes and highlights a pressing issue around women’s health by way of a metaphorical recipe du jour. What gives each message its hilarious, graceful punch is Sanders’ use of familiar character actors.

The premiere episode features Mae Whitman (Good Girls, Parenthood) comparing crisis pregnancy centers to a cake that you don’t actually bake. “Did you see that I didn’t actually butter my pan, much in the same way crisis pregnancy centers offer women one thing and give them another?” she quips. In another episode, Suburgatory’s Jane Levy surveys the breadth of services that would go away if Planned Parenthood were defunded by way of vegetarian chili. Then there’s Crazy Ex-Girlfriend’s Paul Welsh who mocks the mansplaining that happens in conversations about women’s reproductive rights alongside Andi Mack’s Lilian Bowden, who plays a beleaguered quiche chef.

At its best, In the Kitchen offers a blueprint for a different style of political comedy in Trump’s America. A lot of topical comedy these days, both on television and online, targets the president explicitly: Several TV shows have been greenlit in the past year that go after Trump’s orange-tinged gluttony, and more venerable comedy shows like Saturday Night Live and The Daily Show have made sure to take direct hits at the president every episode. But In the Kitchen gives voice to the frustrations of those impacted by his administration’s policies and beliefs, by detailing the specific, and often underreported, challenges that women have to contend with when it comes to reproductive rights.

As Sanders told the Daily Dot, “I chose all of these topics very specifically. These are lesser known and more shocking issues. The fact that maternal mortality rate skyrocketed in Texas….the fact that there are twice as many pregnancy ‘crisis centers’ around the country than abortion clinics. I want people to know about these things.”

Sanders’ goal was to keep things light while taking on serious subjects without getting mired in the frantic partisan debate of the moment. This is why she believes a cooking show was the perfect vehicle for her creative goals. “I was thinking about a soothing or comforting way of presenting this information,” she said. “I thought this was a nice way to deliver the facts on the issue, because it’s not so yell-y and screamy and firey and emotional and scary. It’s like taking a nice warm bath and letting your mind go. “

Female empowerment was a priority behind the camera as well. The creative team is made entirely of women, led by Sanders and director and L.A. sketch veteran Cynthia Kao. The cast is also almost entirely comprised of women with the exception of Welsh’s game turn as the overbearing mini-quiche mansplainer. Sanders is quick to credit Banks and her all-female team at WhoHaha for helping make the project work. She says, “It’s a different vibe when you meet with [WhoHaha]…There is room now for a new way of working, making things happen, and producing stuff. There’s a new energy. There’s more diversity available to us all as far as the way we work together.”

In the Kitchen is just one of WhoHaha’s projects for 2018. With a mission “to celebrate and elevate female voices” in comedy, the site already has a variety of offerings and features comedians like Akilah Hughes and Ali Wong.

It’s this “we’re all in this together” charm that makes the mission of In the Kitchen so easy to swallow. As Sanders explains, “I wish that we could all agree to not falsify this vitally important information. Let’s agree on a bottom line of the facts and go from there. We would get a lot more done.”

The five-episode first season of In the Kitchen is available online at WhoHaha now.