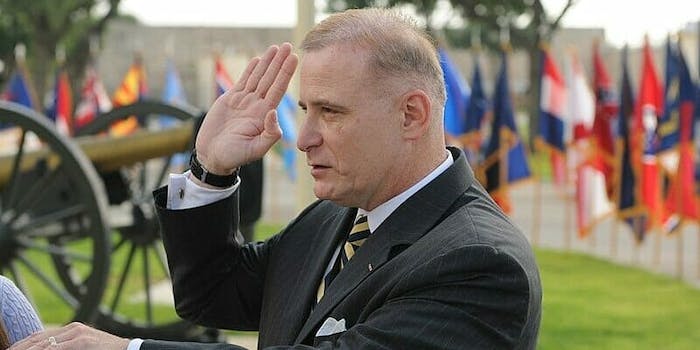 He compared Muslims to Nazis.

An Army director who was hired for a top post at U.S. Citizenship and Immigration Services (USCIS) won’t be filling the role after all. On Friday, it was discovered by BuzzFeed News that the former brigadier general had made of a string of anti-Muslim Facebook posts, and he has since been let go.

Between 2015 and 2016, Guy Sands-Pingot, who had served in the Army for 28 years and was supposed to start his job as USCIS deputy director later this month, had reportedly posted (and since deleted) numerous Islamaphobic articles and memes. This included a photo of Jeff Foxworthy beside a Muslim caricature below the quote, “If you were amazed to discover that cell phones have uses other than setting off roadside bombs, you may be a Muslim,” according to screenshots posted by BuzzFeed. In 2016, he also likened Muslims to Nazis, saying that Muslim intellectuals and a “political axis” exonerate terrorist attacks, which is “similar to saying crimes committed by nazi storm troopers had nothing to do with the Nazi Party.”

When approached by the news organization, USCIS spokesperson Micheal Bars said the agency would no longer be bringing on Sands-Pingot. The man who would have overseen a denaturalization unit as part of his duties once liked the comment, “Immigrants do not have a right to come into this country and make demands,” according to BuzzFeed News.

“After conducting a full and open competition in compliance with all Office of Personnel Management guidance for career vacancies in the Senior Executive Service, including assembling resume review and interview panels as part of the standard hiring process, a candidate was selected for the position of Deputy Director and a tentative job offer was extended, expected to commence mid-September,” Bars told BuzzFeed News. “At this point, however, the candidate is no longer slated to commence employment at USCIS. USCIS is committed to equal employment opportunity, adherence to merit principles, and fair treatment for all employees.”