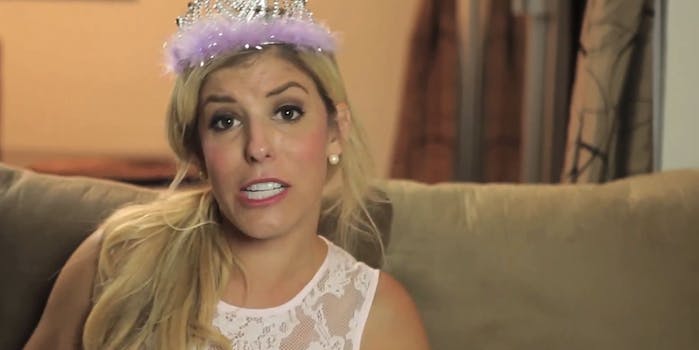 This lady got married recently. And she's really, really happy about it.

Remember the video for Iggy Azalea’s “Fancy,” the sassy, adorable Clueless homage that came out back in March? Well, Rebecca Zamolo, a vlogger who specializes in “all things wedding and marriage,” has come out with an homage to the Australian rapper’s homage.

Except it’s not adorable. Or sassy. And it doesn’t even have that much Clueless in it. It’s a white girl’s ode to the joys of putting a ring on it, and it’s called “I’m So Married,” and if you’re anything like me, it’ll probably make you want to vomit into your cupped hands. (Appropriate reaction GIFs here and here.)

In the video, Zamolo raps about the joys of cooking meals for her man, being treated like a princess, and signing a prenup. In the chorus, she and her friends (who look and act exactly like the mean girls at summer camp who told your crush you stuffed your bra at the ice cream social, then ran away laughing) sing “I’m so married/I got a ring to show/I changed my last name/So all the boys would know”

So all the boys would know what, ladies? That you’ve bought into an archaic system that asks women to give up their last names, the most basic markers of their identities, to signify their total and complete surrender to their male partners? I mean, cool, I guess.

Look, there’s nothing wrong with marriage, obviously, and there’s absolutely nothing wrong with Zamolo being proud and happy about starting her life together with someone she loves. If you can make it to the second and third verses, where the honeymoon phase has clearly diminished, it’s certainly more interesting.

But to continue perpetuating the misguided belief that marriage is the be-all and end-all of every woman’s life, as this video does, is more than a little bit icky. The fact that it features ladies dancing in “wifey” beaters probably doesn’t help either.