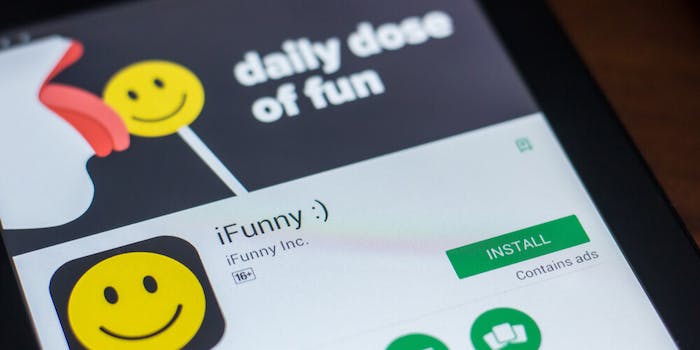 After two arrests within a month of iFunny users who threatened mass violence on the meme sharing app, the site’s owners appear to be trying to keep moderators from exposing further extremism.

BuzzFeed News reports that moderators for iFunny, who are all volunteers, are being given a nondisclosure agreement that the company is calling a “Volunteer Confidentiality Agreement.” The agreement reportedly states, “Volunteer agrees not to use Confidential Information and/or Proprietary Data for the benefit of any other person, corporation or entity, other than the Principal, during the term of Volunteer’s work with Principal, or any time thereafter.” The document essentially prevents moderators from reporting the apparent growing problem with violent extremism on the app to media or police.

This contract is being circulated within weeks of two young men being arrested for making violent threats. On Aug. 19, Farhan Sheikh, 19, was arrested after posting that he would “slaughter” doctors, patients, and visitors at a specific abortion clinic on Aug. 23. Sheikh wrote: “To all the FBI agents in this app, I am NOT a satirical account. I post what I mean and i WILL carry out what I post.”

Less than a week before, 18-year-old Justin Olsen was arrested for violent threats on the app, including talking about targetting Planned Parenthood, gay bars, and federal agents. Olsen shared memes about creating an ethnostate, starting a holy war, and was found to have over 10,000 rounds of ammunition and 25 guns when he was arrested.

The two men are just the tip of the iceberg of far-right extremist content on iFunny. Current and former moderators told BuzzFeed that they were instructed not to remove posts glorifying neo-Nazis and the mass shooter who killed 51 people in Christchurch, New Zealand. In Slack messages, the company’s mysteriously anonymous chief operating officer appears excited about the user growth from iFunny being associated with far-right terrorism. The COO reportedly wrote of Olsen’s arrest, “Will see how many users this story will generate.”

While the company publicly stated that it removes extremist content, moderators say the site is just trying to hide it better. One moderator speaking anonymously to BuzzFeed noted that some users who are still on the platform are hidden from the search function, saying, “Many have theorized [it’s] an attempt to hide them from journalists and the feds.”