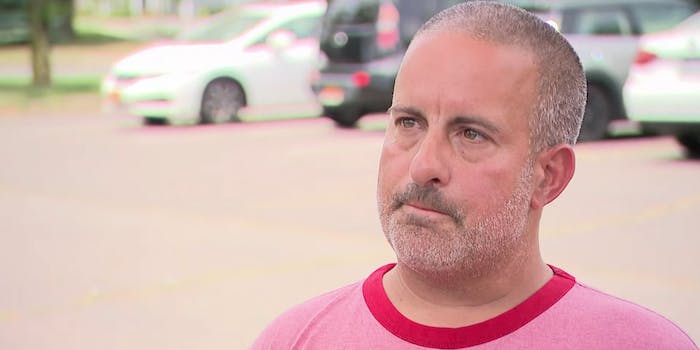 He threatened them with a bat.

Chris Morgan–the man who found viral fame in sounding off in an angry, misogynistic rant at a New York Bagel Boss–is back in the news after another violent episode landed him in handcuffs.

According to TMZ, Morgan was arrested by police at Bayshore Marina in New York, after shouting at strangers and threatening them with a small bat. Police took him into custody for “causing a disturbance.” he was then taken to a local hospital and forced to undergo a psychological evaluation.

Morgan was recorded back in July at a Bagel Boss location on Montauk Highway in Bay Shore, by 18-year-old Diana Reyes. She said she started filming because Morgan was getting in the face of her friend, 19-year-old Olivia Bradley. Bradley confronted Morgan for being rude to the female employees of the Bagel Boss. Apparently, Morgan–who is only 5 feet tall–is very insecure about his height. He was set off because he thought women at the bagel shop were making fun of him because of short stature.

Morgan had a YouTube channel dedicated to documenting public altercations, which he alleges were brought on by people not respecting him because of his height.

In one titled, “Ghetto hoodrat cuts in front of me to use bathroom,” he argues with a woman, who is with her child, for allegedly cutting him to go to the bathroom. In another titled, “Gold diving bitch from queens,” he pleads with a woman to go back to his place with him and berates her when she refuses.

Apparently, the two were on a date, but things turned sour after the rejection.

”That greedy bitch,” he laughingly says to the camera while driving away and leaving the woman standing in a parking lot.

The channel was recently suspended.

After his release, Morgan posted a celebratory video to Twitter, along with the caption, “I’m free fuckers.” In the video, Morgan gives the camera his middle finger and sings along to the tune “Bad Boys,” adding in his own expletive-ridden lyrics.

In another tweet, he echoed Trump’s frequent anti-media sentiment.

“Dont believe everything the news media tells you!” he wrote, adding the hashtag, “ImFree.”

Dont believe everything the news media tells you! #ImFree

Whether you love or hate Boss Bagel guy, it is certain you will be seeing more of him. Morgan is set to fight former professional baseball player Lenny Dykstra on Celebrity Boxing in September.