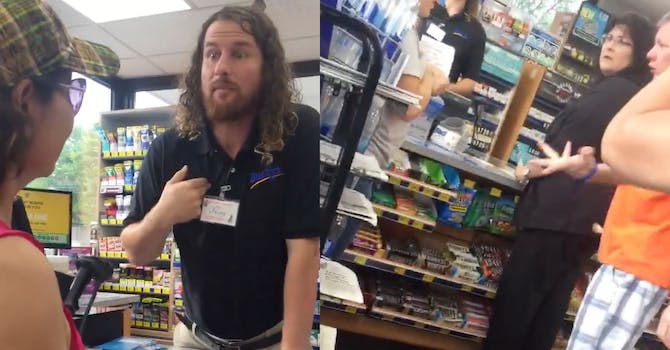 The other customers cheered him on.

A gas station clerk at a convenience store in Naperville, Illinois, has been fired after threatening to call U.S. Immigration and Customs Enforcement (ICE) on two women speaking Spanish.

In photos and videos shared by user Mafer Hmurphy on Facebook, the man behind the counter is seen boasting about being an American and taunting the women about ICE. Carolina Buitron told NBC she was at the store with her family, some of whom were visiting from Mexico. Buitron said the family stopped by a Bucky’s Mobil store to get chips when the clerk asked them to leave because they were speaking Spanish and called them “illegals.” She said the man asked them about her cousins and family and if they were illegal or adopted.

The first video starts with an incoherent conversation, with the man saying, “Over and over, undocumented people, a lot,” while the women appear confused and ask, “Who?”

“I’m an American,” he says, knocking his chest with a finger.

“Eh? What is the problem?” one of the women responds.

“It’s not illegal. What is your problem?” a woman behind the camera asks.

“What is your problem?” the man asks. “Are you a citizen?”

“Yes, what is your problem?”

“Don’t you know the rules?” the man asks, while the women continue to express their shock.

“They need to go back to their country,” he says, apprently referring to the cousins.

As the women are seen walking towards the door, while still arguing, the man is heard saying, “You’ll be sorry. ICE will come.”

He slipped in a calm goodbye at the end. “Bye, god bless you,” he said. “You’re in the wrong country. I’m glad you came.”

The employee has been identified by BuzzFeed News as Joseph Phillip Daniel, a Trump supporter who reportedly calls himself a “prophet” on social media.

The videos were shared on Hmurphy’s page on Tuesday, garnering hundreds of thousands of views. By Thursday, the man had been fired, according to a statement by Bucky’s convenience store on Facebook.

Naperville,IL UpdateRecently, a video was posted on social media of a Bucky's associate engaged in a confrontation with…

“We apologize to all of the individuals that were affected by this associate’s inappropriate behavior,” the statement said. “As with all personnel matters, we did a full investigation and determined this individual’s behavior was unacceptable. He is no longer employed by us. We do not tolerate any behavior that is insensitive to our valued customers.”

Even more chilling than Daniel’s behavior was the support he had from the white bystanders. In a follow-up video, where a young woman is seen arguing with him, a white customer standing behind her is heard yelling at her.

“They do [inaudible], they give business,” says the male customer in an orange t-shirt, while the clerk thanks him. “You have no right.”

“You have no right,” the young woman responds.

A woman standing at the front of the line nonchalantly tells the young woman “You can’t come up here and object.”

The incident comes amid heightened tension following President Donald Trump’s racist tweets asking four congresswomen of color to “go back” to some unspecified country, inciting conversations on social media by many people of color who say they have faced years of similar bullying in everyday settings.

On Wednesday, Naperville Mayor Steve Chirico said in a statement “hate has no home here” and that local police are looking into the matter.

The Naperville Police confirmed on Facebook on the same day that the department is investigating.