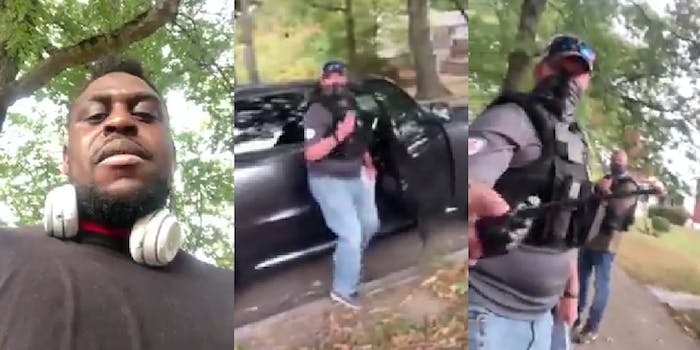 Bena Apreala was jogging near his home in Boston when two SUVs filled with Immigration and Customs Enforcement (ICE) agents pulled up and demanded to know who he was.

The ICE agents allegedly demanded Apreola show them his ID; however, like many people, Apreola doesn’t carry ID with him while jogging and was unable to comply. At this point, Apreola pulled out his phone and began recording the encounter, and the ICE agents reportedly changed their approach, “backing down” and confirming one by one that they were “all set.”

One of the agents then asked Apreola if he had any tattoos on either of his arms. “If I’m free to go, I’m not showing you anything,” Apreola responded. “Thank you. Have a great day, guys.”

Apreola walked away but advised someone on the opposite side of the street to keep filming him “just in case.” Apreola’s wife uploaded the recording to Facebook on Tuesday, providing written context to the incident and urging people to vote.

“He was stopped for ‘running while black’ in a predominantly white neighborhood,” she wrote. “This isn’t something you can ignore and say ‘it doesn’t happen here,’ it does. It happens to your neighbors, friends, and family.”

Later, while speaking on WBUR-FM, Apreola said, “I explained that I wasn’t an immigrant, I’m born and raised in Boston, and that I have no idea what they’re stopping me for. They said that immigration isn’t the only thing that they investigate and proceeded to question me.”

ICE confirmed that the men who accosted Apreola were ICE agents working in the area. “During the encounter, ICE officers determined the individual was not the subject of their investigation and that he did not have any additional information regarding their subject or his whereabouts and was free to leave the scene,” the agency’s statement said.

Wu tweeted it was “unacceptable” and that “Boston deserves full transparency about who these men were & how we will ensure this doesn’t happen again.” She also promised to follow up with federal authorities.

Pressley also called for action and answers from ICE and U.S. Customs and Border Protection (CBP). She condemned both agencies, as well as the President Donald Trump and his administration, writing: “For too long, ICE and CBP have acted with impunity—emboldened by a xenophobic Administration and the Occupant of this White House.”