I was the loneliest pothead on ‘Tinder for stoners’

More weed for me, I guess.

Last week, the Internet repeatedly discovered (or continually regurgitated a press release about) High There!, an app billed as “Tinder for stoners.” It didn’t look as if anyone had actually downloaded the thing, so this past weekend, I did.

Weed and sex are a hot combination. Both topics lend themselves to hacky one-liners: There’s the “sex ed for stoners” class that no one seemed to actually attend. There are dating sites like Stoner Singles, but most resemble gimmicks rather than platforms for connection. I had higher hopes for High There!

I filled out a minimalist profile, ticking off interests in music, the outdoors, and cultural excursions, and registered the “medium” energy I associate with pot use. I indicated no preference between methods of cannabis consumption: smoking, vaporizing, edibles. In the app’s parlance: “It’s all good.” 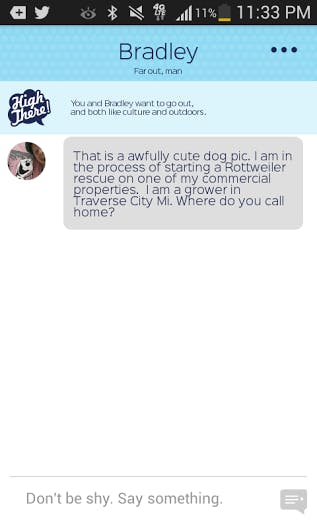 I was going to have to do what no stoner is equipped to do: initiate a conversation.

Then I sat back, sparked a bowl, and waited for the flirtatious openers from foxy dope fiends to pour in. Nothing. I watched a couple episodes of Transparent. Still nothing. I washed the mountain of dishes piled in the sink, and returned to my phone to find, once again, that no one cared to contact me, even to see if I might sell them a gram. Was my profile picture of a blunted cartoon owl a little too on the nose? I switched it to a regular photo, but my luck didn’t change. I was going to have to do what no stoner is equipped to do: initiate a conversation. High There!’s interface doesn’t quite clone Tinder’s: you can left-button (“next”) a person, or right-button (“connect”) to ask for a chat. Only when the user’s approved that request can you interact with him or her. At first I was stingy with my requests and stuck to women. When nobody followed up with me, I opened the field to men. I eventually fell into the Tinder-hack celebrated among undiscerning dudes: swipe right on everyone.

Reader, it was for naught. The one guy who accepted my invite told me he’d had lots of success with the app and lived in Cedarhurst, a town 18 miles out on Long Island—a bit far away for a hang on the couch. When I asked if he’d smoked anything good lately, he stopped responding.

My wife set up a profile and within an hour had 40 chat requests, all from men.

Noticing my growing frustration, my wife, Cecilia, posited a theory. “You’re not getting matched because you’re a guy,” she said. I didn’t want to believe this—getting stoned shouldn’t be a gendered thing, according to my hippie ideals. Nevertheless, she set up a profile and within an hour had 40 chat requests, all from men. Soon she was so inundated that the app, rather glitchy at its best, had crashed several times. Many messages originated in places as remote as Michigan and New Mexico. (“Far out, man,” is how the app puts it.) They often matched the template of a generic OkCupid introduction, though one bro simply copy-pasted all his details: height, location, single, etc. He finally declared that he was “drug and disease free.” Yeah, drug-free. On a dating app for stoners. OK then. 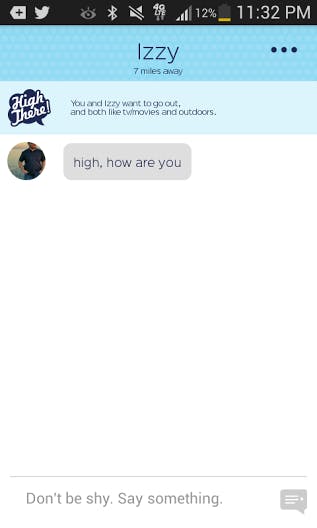 So there you have it: The so-called Tinder for stoners is really nothing more than a female pothead locator. Either that or I’m way less attractive and chill than I thought.