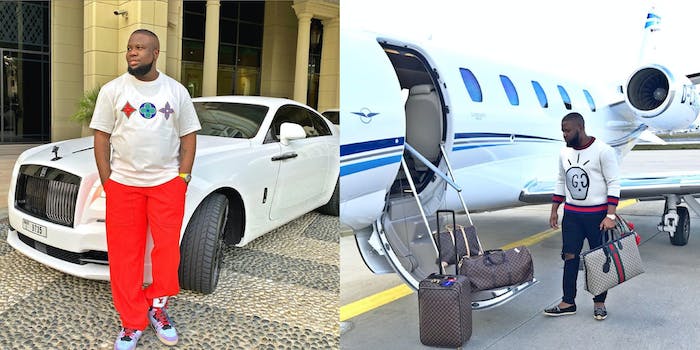 Hushpuppi and an accomplice were arrested in Dubai in June. They appeared in a Chicago court on July 3.

Hushpuppi, whose real name is Ramon Olorunwa Abbas, and an accomplice, Olalekan Jacob Ponle, were arrested in Dubai in June. They appeared in a Chicago court on July 3.

The United Arab Emirates has no extradition treaty with the United States; Dubai police claim they had been extradited to the U.S.

A spokesperson for the U.S. Department of Justice tells BBC that Hushpuppi was expelled from Dubai and was not extradited. He did not know how Hushpuppi ended up in U.S. custody.

Because of this, Hushpuppi’s lawyer, Gal Pissetzky, is not convinced his client was legally extradited.

“There was no extradition, there were no legal steps taken, there were no court documents filed, it was simply a call to the FBI. He is not a citizen of the United States,” Pissetzky told BBC. “The U.S. had absolutely no authority to take him.”

According to the Grio, the 37-year-old Nigerian influencer was arrested for an alleged money laundering operation. The FBI believes he stole hundreds of millions of dollars through a process that involves hacking, infiltrating, and redirecting the communications of legitimate businesses in order to make wire transfers and launder money.

But Pissetzky claims that his client, who posts about his lavish lifestyle on social media, was not a criminal and made his money legitimately.

When the FBI and Interpol raided his Dubai apartment, they reportedly seized more than $37 million in cash, 13 luxury cars, 21 computers, 47 cell phones, and two million addresses said to be from victims.

“If Dubai wanted to expel him, they should have expelled him back to Nigeria. I’ve never heard of anything like that. That is the real story here,” Pissetzky said.