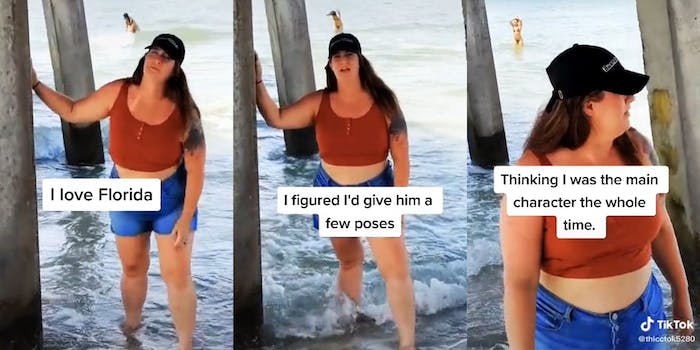 ‘I saw who he was really recording’: TikToker realizes husband is filming woman in bikini behind her after watching video from Florida vacation (updated)

'This hurt my feelings and it's not even about me.'

A woman says she recently returned from a Florida vacation to realize that her husband was checking out a woman in a bikini behind her, in a video he ostensibly took of her. She posted the video in question to TikTok.

The video comes courtesy of TikToker @thicctok5280, who shared the clip of her Florida vacation to the delight and horror of many. In just two days, the video’s racked up more than 2.8 million views.

It starts off with the Denver-based TikToker (hence the 5280 in her user name) using the auto-narration feature to relay the opening caption, “I was watching my husband’s video from our Florida trip last week.”

Then, with Bazzi’s “Paradise” playing in the background, it shows the TikToker walking toward her husband underneath a large pier.

She then leans against one of the pier’s posts, and the caption reads: “I figured I’d give him a few poses,” followed closely by one that notes, “Thinking I was the main character the whole time.”

Behind the TikToker, out in the water, a woman in a bikini is visible in the video. The TikToker walks out of the frame, and then the video drifts briefly to a group of people to the right of where she was standing—then pans back over to the woman in the bikini, with a closing caption that reads: “Until I saw who he was really recording.”

A number of people jumped into the comments to sympathize with the TikToker. One wrote, “This hurt my feelings and it’s not even about me.”

Another observed, “I’m fine with my other half ‘looking’ but documenting will break my heart.”

That led someone to agree about documenting being a bridge too far, adding, “It’s weird because he could have just looked and it would have been fine.”

“Girl,” another respondent chimed in, “I’m mad at my husband now and he didn’t even do anything.”

Not everyone found fault with the videographer husband, though. One observer challenged her premise, asking, “Was he really recording her? It was YOU YOU YOU and then two seconds of her. C’mon now.”

The creator wrote back in response to our questions regarding the video. She noted, “It was Naples Pier about a week ago. I posted it as a joke; we thought it was hilarious since everything was so coincidental, so I captioned it. This was 100% supposed to be funny.”

She also expressed concern about some of the reactions, noting, “It was clear that it triggered a lot of insecurities and that part was sad to me, but it definitely is something people should be aware of, because no doubt in life it happens.” She did add, regarding her husband, “We are very happy together and I’m not leaving my husband. He is my best friend and that video was 100% about me, she just happened to be in the background. Shout out though to every woman who had my back, we got to look out for one another.”

She also sought to clarify that her “yes” in response to the “Was he really recording her? It was YOU YOU YOU and then two seconds of her” comment was agreeing with the observation that the video was really about the TikToker, and not answering yet to the query about whether she felt her husband was really filming the woman in the background.