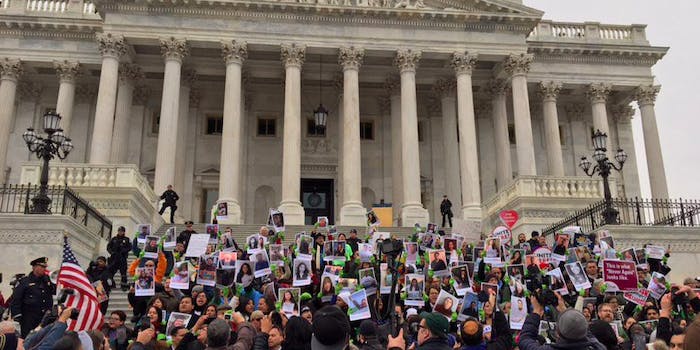 About 800,000 Dreamers are at risk of deportation.

The #DreamActNow protest brought together people of all backgrounds, races, and ethnicities, to support the immigrant community and stand beside Dreamers—young immigrants who were raised in this country and protected under the Deferred Action for Childhood Arrivals (DACA) program until President Donald Trump terminated it in September. Protestors demanded Congress pass a clean DREAM Act that would create a pathway to citizenship for young undocumented immigrants and provide a permanent solution for temporary protected status holders.

Signs of every size and color demanding a #DreamActNow are adorning the Senate Upper Park pic.twitter.com/fEfRxZyukT

#BREAKING: Hundreds of #DreamActNow protesters facing arrest on the steps to the Capitol. pic.twitter.com/jCkt4YKtyA

We approve this message!
Join us now at upper senate park rallying for #CleanDreamAct & #ProtectTPS pic.twitter.com/X4QCNo0eWR

Proud of our partners in the Fair Immigration Rights Movement .@firm who are in the trenches with us day in & day out for a #cleandreamact & the extension of #TPS for all nationals who have it. .@UNITEDWEDREAM .@nakasec .@32BJSEIU .@ufcw [email protected] pic.twitter.com/29iq2pfOxM

WATCH NOW: Black and Asian American Pacific Islander immigrants are in D.C. today fighting for permanent protection for Dreamers and Temporary Protected Status (TPS) holders. CREDO is proud to team up with our friends at UndocuBlack Network and NAKASEC to deliver more than 200,000 petition signatures to members of Congress demanding that they pass the #DreamActNow with no strings attached. #OurDream

There are about 800,000 Dreamers in the U.S. who are at risk of deportation—the majority of which live in California and Texas and are between the ages of 21 and 25.

Some Dreamers have been posting their personal stories on social media with the number of days they have left until they lose their protection status.

I was 10 when I came here, loosing DACA would mean losing everything I’ve worked so hard to accomplish in this country. Most importantly, it means not being able to provide for my 6 year old daughter. DACA gave us hope, please don’t let that end!" #CleanDreamAct #DreamActNow pic.twitter.com/ciYoIB2mzg

Any spending bill that does not include a #DreamActNow is a vote for the deportation of immigrant youth. We need Congress to act NOW!

My name is Carolina. My life is not a political toy. In 275 days, I could be deportable unless #DreamActNow @UNITEDWEDREAM pic.twitter.com/kZxtfBJx4I

This is Luna, he is one of our leaders here at United We Dream. In 50 days, his DACA will expire thanks to Trump's arbitrary deadline. He needs a clean #DreamActNow because after 50 days he wont be able to study or provide for his family.

In addition to the protest Wednesday at the U.S. Capitol, there have been several recent protests and walkouts nationwide for in support of Dreamers and immigration. A related online petition calling for Congress to restore DACA, expand eligibility and the age limit to 18 for DACA, and to protect all Dreamers from deportation, has gathered more than 175,600 signatures