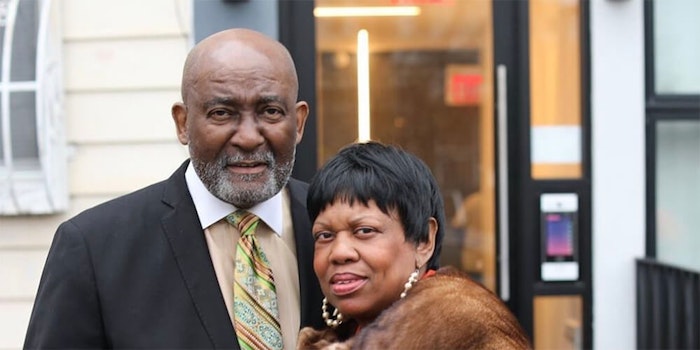 Bobby Love spilled all about his secret past—and the wife who worked tirelessly to get him back.

The greatest prison break story you’ve never heard of should be a Netflix series—but it isn’t. It’s an 11-part post on the Humans of New York Instagram account.

Back in November, Humans of New York posted the epic life story of a stripper named Tanqueray. Yesterday, the account dropped an equally jaw-dropping tale. It features a man named Bobby Love, his secret past, and the wife who worked tirelessly to get him back to freedom after the law caught up with him.

It all starts with a post narrated by Cheryl, Bobby Love’s wife. She said when she opened her door one morning five years ago, she found a dozen officers ready to barge into her home.

“Some of them had ‘FBI’ written on their jackets. They went straight back to the bedroom, and walked up to Bobby. I heard them ask: ‘What’s your name?’ And he said, ‘Bobby Love.’ Then they said, ‘No. What’s your real name?’ And I heard him say something real low. And they responded: ‘You’ve had a long run,'” Cheryl Love explains. “That’s when I tried to get into the room. But the officer kept saying: ‘Get back, get back. You don’t know who this man is.’ Then they started putting him in handcuffs.” 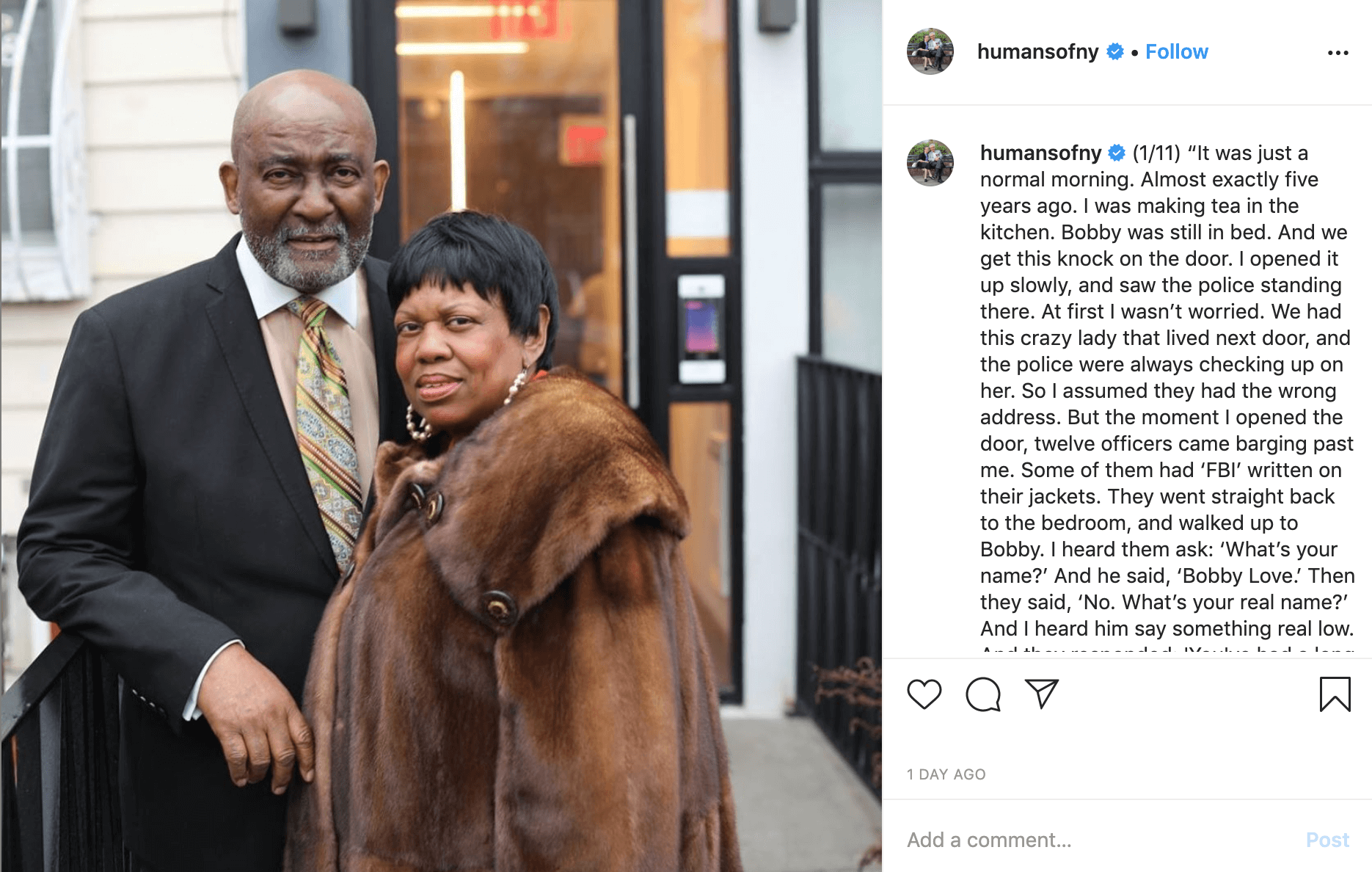 In the following post, Bobby Love takes over the story and reveals that he was once named Walter Miller. He says he had a fairly normal childhood—until he got into some trouble at a Sam Cooke concert at the age of fourteen.

“I screamed at the top of my lungs: ‘Sam Cooke ain’t shit!’ And in North Carolina, back in 1964, that was enough to get me arrested for disorderly conduct,” he says. “Things went downhill pretty quick after that.”

Love says after that, his behavior escalated. He was caught stealing from his school’s band room and got sent to a juvenile detention center, which he hated. Fed up with the bad food and the violence of the other kids, Love decided to make a run for it one night when a guard had his back turned. That was his first escape.

From there, he followed the train tracks to Washington, D.C., where he lived with his brother and enrolled in a new high school. All was going well until he got involved with a group of kids who were up to no good. Love began robbing banks with his new friends and getting away with it. But when they robbed a bank with a silent alarm, they emerged from their heist to find the police waiting for them. Love tried to make a run for it—but got shot in his buttocks and woke up in the hospital.

“This place was more like a camp,” Love says. “They still had gun towers and everything, but there was a lot of freedom. They let us walk around the yard. We could make phone calls. I even had my own radio show. It was a lot of fun. I recorded it every Wednesday, and they played it on the local college station. I was relaxed. I was feeling good. I had no plans to escape.”

But when a prisoner yelled “punk ass” at the prison captain, Love’s luck changed again. Convinced that Love was the culprit, the captain began picking on Love. Love says the more he tried to do good, the more he got punished. He was sent out on the road to pick up trash where passersby in cars hurled milkshakes and hamburgers at him. Unhappy, and fearful he’d be sent up the hill again, Love began planning his escape.

“I memorized the bus route. I noticed that we always stopped at a certain intersection—right next to a wooded area. And I figured I could make that distance in no time at all. I also noticed that the guard who worked on Tuesday never searched the prisoners as they boarded the bus. So one Monday night, while we were watching the Colts game on TV, I made the decision. That was going to be my last night in prison.”

The next day, Love made a run for it, avoiding white neighborhoods and determined to get to freedom.

“Every time I passed a brother, I asked for directions to the Greyhound station. Everyone kept telling me: ‘Keep going, keep going, keep going.’ When I finally got there, I found a brother in the parking lot who agreed to buy me a one way ticket to New York. I waited until the last minute. I jumped on the bus right as the driver was closing the door. Then I slunk down in my seat while we drove out of Raleigh. Once we got on the highway, the girl next to me started making small talk. She asked me my name. I thought for a moment, and said: ‘Bobby Love.’ And that was the death of Walter Miller.”

Love goes on to describe how he built a new life from scratch. Thanks to forgeries, photocopies, a new social security card, and a DMV worker who was kind enough to give him a new drivers’ license despite his questionable documentation, Love was able to establish his new identity. He went on to find a job at the Baptist Medical Center, where he met Cheryl, who he describes as the complete opposite of himself.

Love and Cheryl got married and raised four children together. He never told her about his past because he knew that she was honest to a fault. He explains he didn’t think she would call the cops on him, but he did imagine she’d make him turn himself in.

In the posts that follow, Cheryl describes what it was like to be married to Love, how she’d always felt there was something missing. Her husband was hardworking and a good provider—but distant. When the FBI showed up and her world came crashing down, Cheryl says she was devastated and angry. But, she says, she chose to forgive her husband and worked tirelessly to earn him back his freedom. 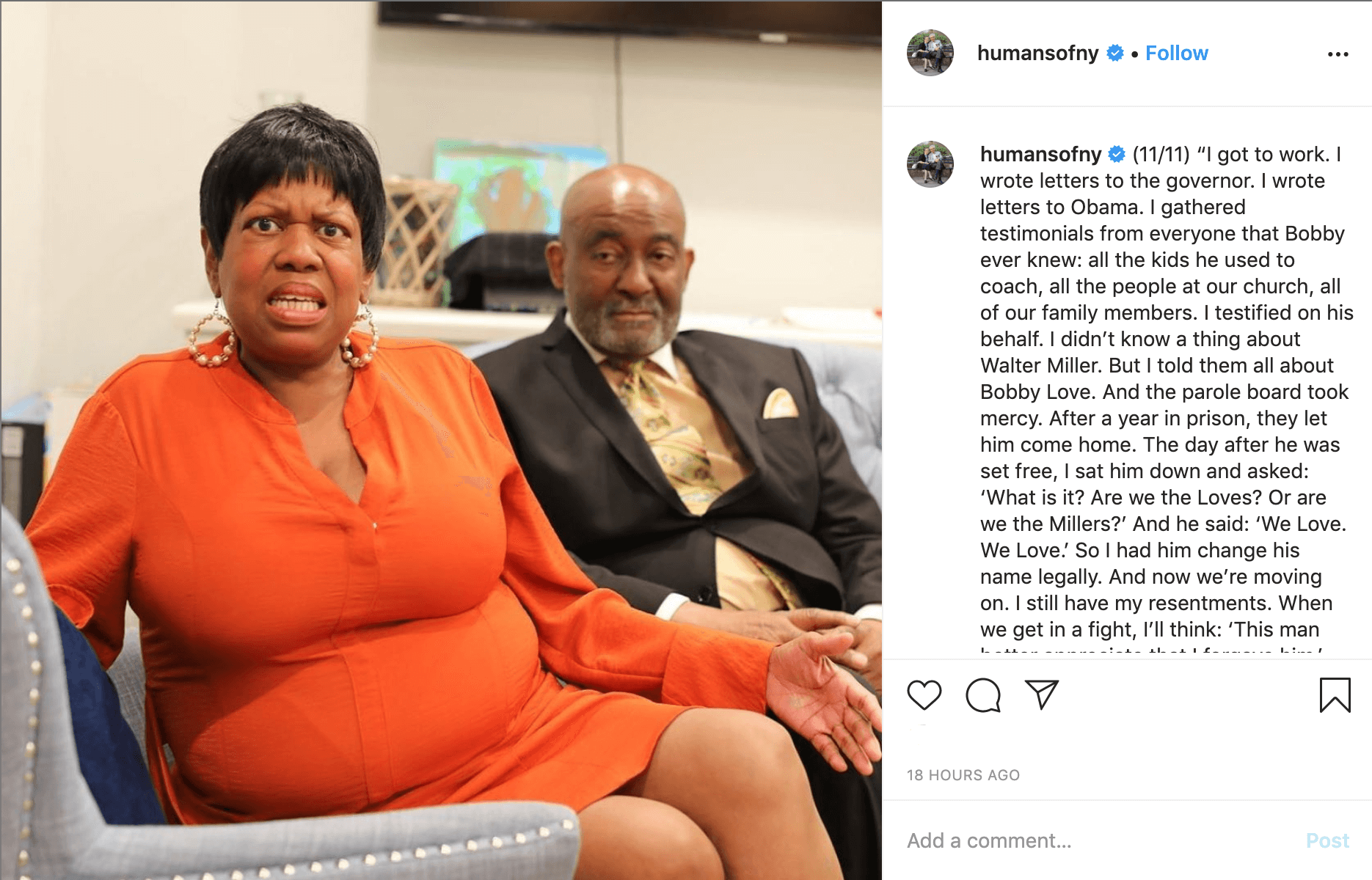 “I got to work. I wrote letters to the governor. I wrote letters to Obama. I gathered testimonials from everyone that Bobby ever knew: all the kids he used to coach, all the people at our church, all of our family members. I testified on his behalf. I didn’t know a thing about Walter Miller. But I told them all about Bobby Love. And the parole board took mercy. After a year in prison, they let him come home … And now we’re moving on. I still have my resentments. When we get in a fight, I’ll think: ‘This man better appreciate that I forgave him.’ But the thing is—I did forgive him.”