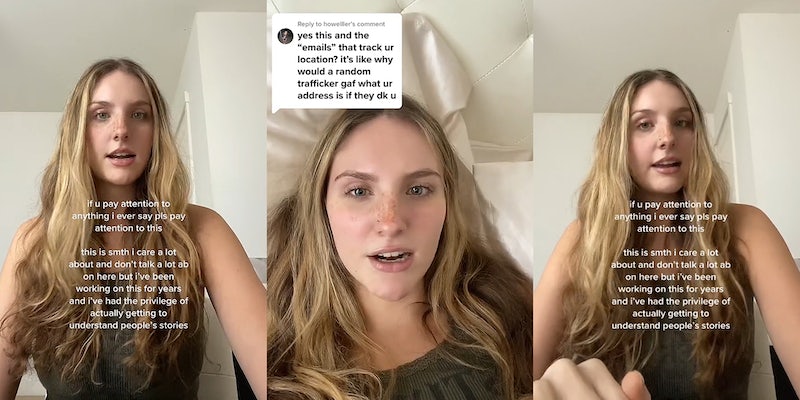 ‘This is not how human trafficking works’: Woman debunks TikTok’s latest trafficking hoax about finding money on your car windshields

'There is an obsession with middle class white women being trafficked and it completely overshadows the reality.'

TikTok is overrun with trafficking hoaxes and misinformation, much of which seems to be rehashed and repackaged every few months. A TikToker named Abby (@boopyshmurda) recently debunked another rumor, responding to a TikTok from @janelleandkate, a joint account for “best friends” Janelle Flom and Kate Heintzelman.

In a TikTok posted earlier this week, which has more than 10 million views, Heintzelman claims that “they” (she never says “human traffickers” but it’s insinuated) are leaving money on targets’ car windshields, as well as tying zip-ties to or leaving laced napkins on car handles, ostensibly in an effort to abduct women.

“No, they’re not,” Abby starts off in her response video, which has more than 1 million views. “And this is not how human trafficking works.”

While Abby says she doesn’t think there are “bad intentions” here, she notes that “this is probably the most harmful media that’s put out there in terms of anti-trafficking efforts.”

“Yess, there is an obsession with middle class white women being trafficked and it completely overshadows the reality, you’ve explained this so well,” said one commenter.

The zip-tie claim was debunked in 2019 but these fake tactics are often re-amplified by Facebook or Instagram before they make it to TikTok again. There are a few accounts that debunk trafficking misinformation, but the volume of it far outpaces those debunking.

More troubling is where this particular misinfo came from. The @janelleandkate account, which has more than 3.6 million followers, was also behind a recent fake viral pregnancy test video and has produced a few nasty “food hack” videos. Flom was cited in a 2021 Eater report about the origin of those weird food videos, which are very popular on Facebook: One of Janelle and Kate’s Facebook food hack videos from 2021 has 42 million views. They also recently went viral for putting a toilet seat in the dishwasher.

They essentially do Facebook prank content, so the fact that so many people are treating the trafficking TikTok as legit is worrisome.

“This is why i go no where without my bf,” is the top comment on their TikTok.

But the targets for traffickers are not random women in parking lots; as Abby points out, it’s often the unhoused or those struggling with addiction, often someone from a marginalized group, and almost always someone the person knows.

Her TikTok was also posted to Twitter, where people are a little more skeptical about these videos.

We reached out to Flom and Heintzelman via Instagram direct message, and Abby via email, for comment.