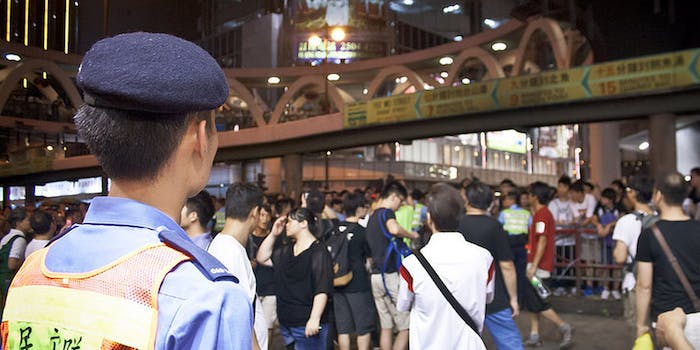 If this isn't an abuse of power, what is?

With sweeping democratic protests in Hong Kong over Beijing’s attempt to restrict the vote in the region’s 2017 elections solidifying into the #UmbrellaRevolution or #OccupyCentral movement, it’s perhaps a foregone conclusion that local police will cross a line or two.

Still, it’s no less alarming to see an elderly person—who may have been trying to calm agitated demonstrators—turned around by a cop in riot gear to receive a point-blank hit of pepper spray to the eyes and face. Even fellow officers seem shocked by the action.

China has already blocked Instagram in an effort to stem the viral spread of images that speak to the seriousness of Occupy Central or the methods being used to contain it. But proof of mass civil disobedience has a way of wiggling loose from authoritarian control.

Photo by Natasia Causse/Flickr (CC BY 2.0)