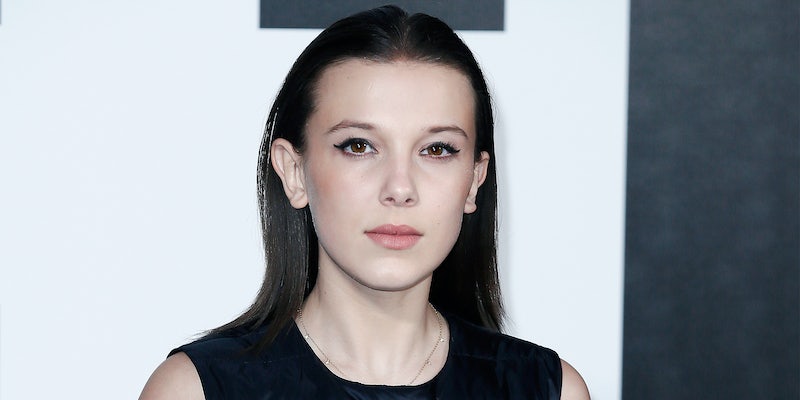 A new meme is on the rise: Homophobic Millie Bobby Brown. Fans of the 14-year-old Stranger Things star might be shocked to read a deluge of stories on Twitter about her confronting people with homophobia, Islamophobia, and other bigotry. They would be rightfully surprised; the stories aren’t real.

The meme appears to have started with a series of tweets on November 17, 2017, from now-suspended Twitter account @KelsFiona:

In the replies to this now infamous tweet, the hashtag #TakeDownMillieBobbyBrown was born. It has burbled under the surface for the past several months, but Pride Month appears to have caused it to boil over. A quick look in the hashtag reveals stories of assault, verbal abuse, and even photoshopped images meant to appear as posts from her social media.

i met millie at subway and i asked her for a picture. she took my phone and smashed it and said “i have no time to talk to faggots” and then proceeded to spit and fart in my sandwich. “maybe youll lose some weight now you fat bitch!” #TakeDownMillieBobbyBrown

There’s a long, and often funny, history of posting fake quotes from celebrities on the internet. ClickHole has a whole section for it. The joke is to make the quote or story so ridiculous that it could not possibly be believed. Many Millie Bobby Brown fans seem to feel that because of her sweet nature, and past public support for GLAAD, these jokes fall into that category.

However, others have taken issue with the meme. What started as clearly false stories has spiraled out into fake social media posts as well, which some may take as actual evidence of bigotry from the child star. In addition, its use of homophobia as a punchline, and the target being a literal kid, has drawn ire from many. The backlash increased when Brown deactivated her Twitter account on Tuesday, a move that some believe is in response to the hashtag.

millie gets so much hate. And some people were like 'lets try to make millie look like a homophobic! And use the hashtag #TakeDownMillieBobbyBrown !'

Y’all aware that your “joke” about Millie bobby brown can be taken in many ways and it’s gotten to the point where she’s deleted her Twitter. I understand that it’s “just a joke,” but y’all need to learn when to stop because jokes can be so harmful sometimes

PopBuzz reported that the memes are now being removed from Instagram. So far, Twitter has yet to take similar steps, and based on its track record, is unlikely to do so.