You don't have to sit back and be harassed online.

Posting a selfie is hard.

While it may seem like a simple act of vanity, for many the idea wages an internal battle between wanting to project self-confidence and the worry that you might get called ugly—or worse. If, or rather when, that harsh scrutiny does arrive in the comments, a new online platform called HeartMob hopes to soften the blow.

Launched today, HeartMob was created by anti-harassment organization Hollaback!. The group was behind one of 2014’s most viral videos, which showed a woman walking in New York City for 10 hours and all the crude comments she received. That video inspired many iterations (and parodies), and, most importantly, made a powerful statement about harassment in real life. Now Hollaback! has taken its efforts to the online frontlines, where a different kind of harassment plays out each day.

“After over 10 years of running Hollaback!, I’ve been harassed and attacked online repeatedly,” Emily May, co-founder and executive director of Hollaback!, told the Daily Dot via email. “Even worse, I’ve seen our site leaders, partners, and friends harassed online—and I’ve seen incredible women leave the Internet as a result.” Now, she explained, they’ve had enough of adapting to the problem, and they’re ready to change it.

The tipping point came for May in October 2013 when May felt that discussion of online harassment was reaching a fever pitch. She wanted a solution, and with the help of her team, had a realization: “[W]hy don’t we take everything we’ve learned from addressing street harassment, and apply it to this completely different landscape: the Internet.” That’s when the idea for HeartMob was born. 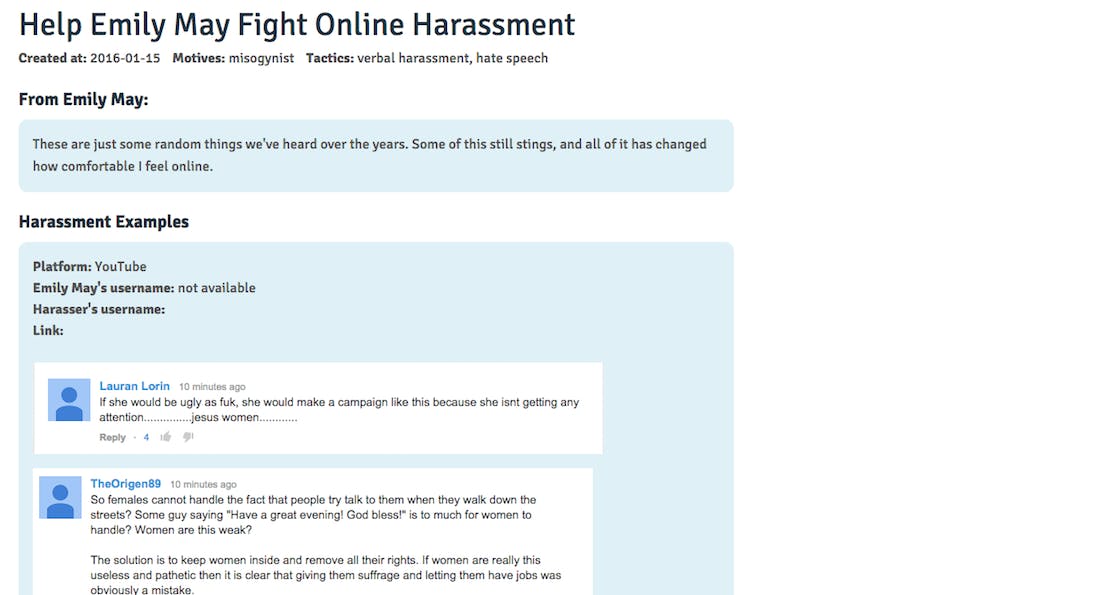 There are two ways to be an active HeartMob user: You can either sign up to help people who are getting harassed, or sign up to document and get support for your own harassment. If you’re signing up for yourself, you’ll be given a form to fill out with specifics regarding the incident, such as the platform where it occured (Facebook, Twitter, etc.), screenshots of the interactions, the type of harassment tactic and what you believe could be the motivation. 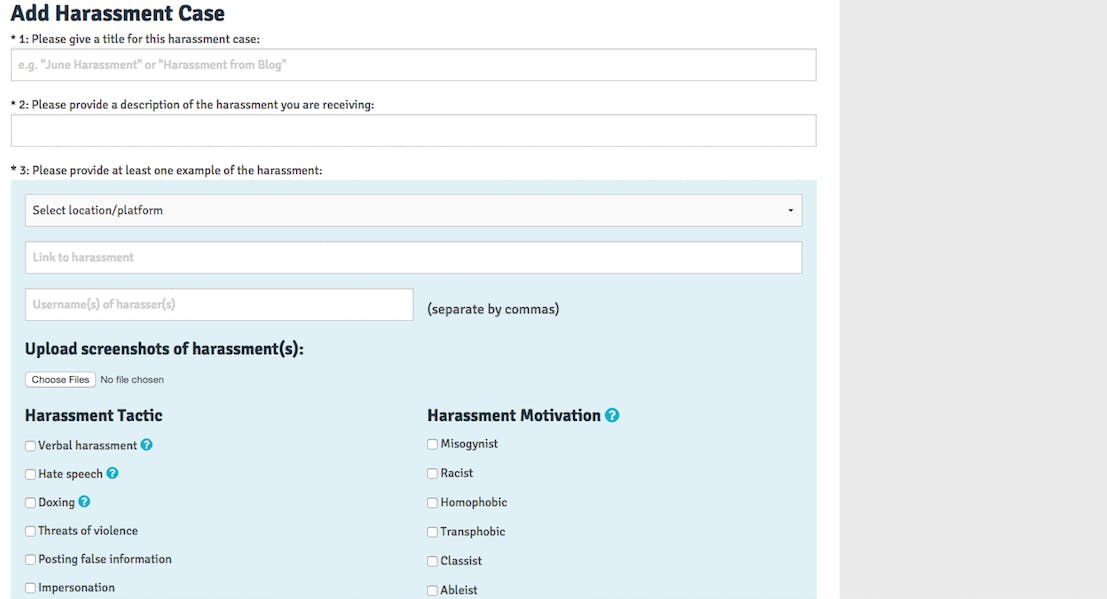 Supporters, or HeartMobbers, craft custom messages to users who have posted their harassment stories with encouraging words about appearance, self-esteem, and ignoring the haters.

This isn’t Hollaback!’s first foray into using technology to fight harassment: Back in September, the organization re-launched its official app, called the Hollaback! app, which documents real-life street harassment.

May told the Daily Dot at the time “The original concept was ‘let us tell our stories and see if anyone else is going through this.’ It was happening all the time to us and no one else was talking about it… We felt like ‘Are we the only people in New York City being harassed or what?’ And obviously we are not, it’s happening to so, so many people.”

HeartMob and the Hollaback! app serve disparate functions with equal importance: someone experiencing catcalling could fear imminent danger and sadly, the same can be said for harassment online. Another function of HeartMob is that users can assess whether a threat made online is credible, and the platform will help them decide whether or not they should turn to the authorities.

The anti-harassment movement had another stepping stone this past fall with an online guide called Speak Up & Stay Safe. Started by Anita Sarkeesian, Renee Bracey Sherman and Jaclyn Friedman, it serves as a primer for dealing with online harassment by providing helpful tips like asking a friend to look through your Twitter feed or stepping away from messaging devices when you’re feeling overwhelmed. (The three women are pretty much the foremost experts on the subject of harassment: Sarkeesian rose to fame after being in the eye of the GamerGate storm and activists Bracey Sherman and Friedman have both drawn the ire of the Internet time and again.)

In an email to the Daily Dot, Bracey Sherman admitted she has not yet used HeartMob, but is supportive of the concept behind it. “Resources that support people experiencing harassment are always helpful,” she wrote. “You can never have too much information, especially when you’re experiencing a crisis and don’t know who you can turn to for support.”

Still, Bracey Sherman continued that while she feels Speak Up & Stay Safe and HeartMob are important resources, the onus is really on individual social platforms to police its users. She wrote:

“They must take steps to enforce their terms of use and protect their users who are being harassed in the digital community they’ve created. No one should be harassed online, and social media platforms can’t be let off the hook for their inaction. Companies must support those who use their product, especially those who may not have access to resources to protect themselves online.”

“As we look to deepen our relationship with communities deeply impacted by online harassment, like teenagers and survivors of intimate partner violence, we’ll be working inside those communities to learn more about how they are using the platform, and what, if anything, they need to make it work better for them,” May wrote of Hollaback!’s plans for HeartMob. “We’ll also be establishing partnerships with organizations who focus on serving those communities to ensure that survivors of online harassment are getting the support they need online and off.”