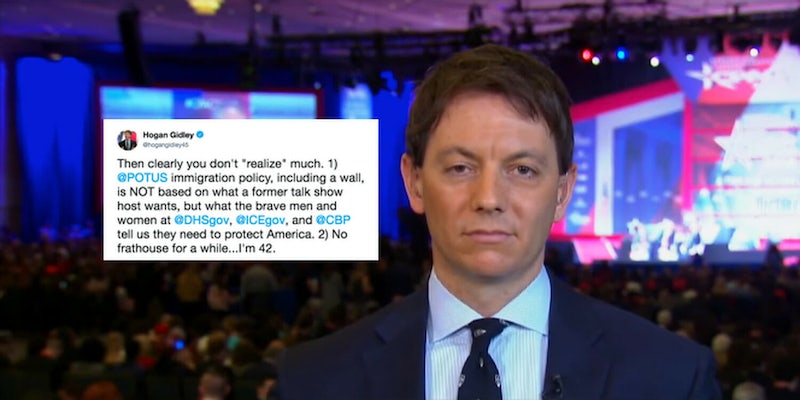 Hogan Gidley didn’t take too kindly to being branded a college fratboy or Montel William's criticism of the president's border wall plans.

Williams, who tags himself in his profile as a member of the widely mocked anti-Trump #Resistance, took shots first in response to one of Gidley’s tweets about a White House cabinet meeting.

Gidley didn’t take too kindly to being branded a college fratboy, seizing the opportunity to not only inform Williams that he was 42 years old but to also publicly lash out at Democrats critical of the wall.

Then clearly you don't "realize" much. 1) @POTUS immigration policy, including a wall, is NOT based on what a former talk show host wants, but what the brave men and women at @DHSgov, @ICEgov, and @CBP tell us they need to protect America. 2) No frathouse for a while…I'm 42. https://t.co/8n0iuLyCdE

Bemused by the partisan exchange, Twitter users on the left and right fell in line behind each man.

Some cheered Gidley on for his put down.

Some slammed the deputy press secretary for going after Williams, who is a veteran.

That talk show host served his country in the military. Your boss on the other hand got his Daddy to call in a favor to a podiatrist for a fake bone spur diagnosis so he could dodge the Vietnam War.

Meanwhile, others were quick to point out to Gidley that Williams’ status as “a former talk show host” no more disqualifies his opinion on immigration policy than the president’s career as a reality show host.

Williams’ mentions, meanwhile, are currently flooded by Trump trolls and other users dragging him for his prior endorsement of Money Mutual—a lead generator for exploitative payday lenders.